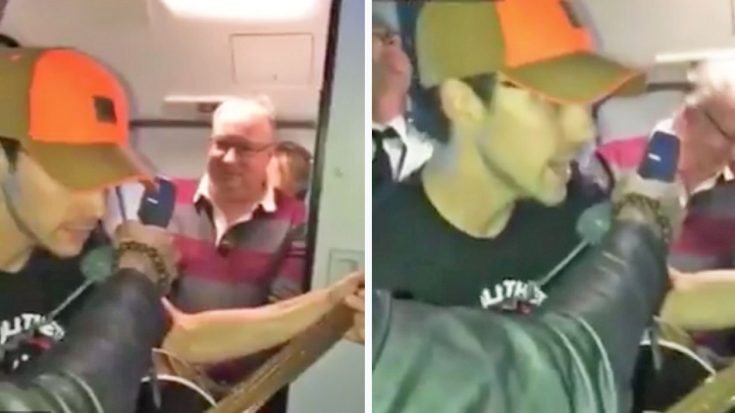 On Sunday (Dec. 17), there was a massive power outage at the Hartsfield-Jackson International Airport in Atlanta, Georgia. According to CNN, around 30,000 people were affected by the outages.

While some travelers were able to board their departing flights, others were told they would have to wait hours, or even days to get a flight out. A total of 1,200 flights were cancelled with some passengers stuck on the tarmac for hours on end.

On one of those flights that was stuck on the tarmac for over six hours was country singer John King. People on his plane were losing patience and luckily, King had his guitar with him, so he figured he’d give his fellow passengers a free show.

He shared the moment on his social media accounts with the caption, “Tryna [sic] lift spirits in #ATL after 6hrs stuck on the Tarmac.”

With a flight attendant holding the speaker so he could be heard throughout the plane, King performed Tom Petty’s “Won’t Back Down,” a song everyone in their situation probably appreciated at that moment.

Along with being a rising country star, King is earning national recognition as a songwriter. He’s penned Randy Houser’s “We Went” and co-wrote Craig Morgan’s “I’ll Be Home Soon.” He is currently signed to Starstruck Entertainment.

Watch the incredible moment below.