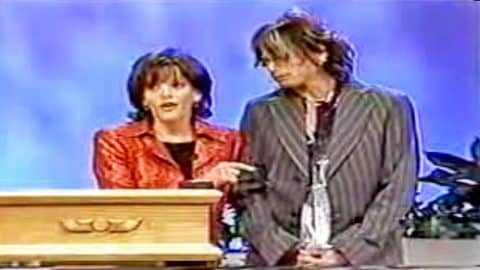 During a 2001 church service in Michigan, the congregation saw something they never believed they’d see…

Marianne Williamson was the pastor at Church of Today for over five years in the late ’90s and early 2000s. The services there were often highly televised and used as part of her teachings in guidance and self help.

Williamson was also well known for being a serious source of life-change through her audiobooks which made their way to Steven Tyler’s lap, and ultimately, inspired him to change his life.

update. steven tyler is in church with me. his toenails are painted. pic.twitter.com/Ks8nwUjKr7

It was through this partnership that the famed church leader was able to bring the hard-rocking Aerosmith frontman to her home congregation for a once-in-a-lifetime Sunday service.

Welcoming him to the stage, Williamson likely saw a look of utter disbelief wash across her congregation as they paused in shock before cheering for Steven on stage!

Joining powerful gospel singer Juliette Hamilton and the church’s band, Steven Tyler gives one of the most heartfelt and compelling renditions of “Amazing Grace” we have ever heard!

The folks in attendance that day are likely to never forget that Sunday!

Watch the full video below!