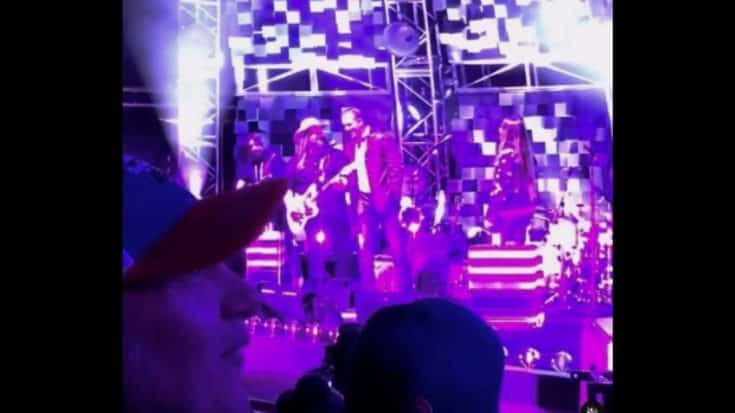 Chris Stapleton was one busy guy on the night of May 23, 2017! Early in the evening, Stapleton hit the stage during The Voice finale to perform his new single, “Either Way.” But he didn’t have time to hang around, because he had another gig to get to.

Stapleton took off right after he was done on The Voice to head to his concert, which was at the Red Rocks Amphitheater in Morrison, Colorado. He made it just in time, and wowed the crowd with one song after another.

Those who gathered to watch Stapleton perform that night got the chance to hear a wide variety of material. He sampled some of his most recognizable songs off of his hit debut album Traveller, and also performed a few songs off of his then-new album, From A Room: Volume 1.

But the one song everyone was waiting to hear was “Tennessee Whiskey.” Originally recorded by David Allan Coe and transformed into a hit by George Jones, Stapleton helped revive interest in the song with his unique rendition.

Stapleton had a big surprise in store for his Red Rocks audience when it came to his performance of “Tennessee Whiskey.” Much to the crowd’s delight, he invited a major celebrity to join him on stage to sing a “Tennessee Whiskey” duet.

That celebrity was none other than Peyton Manning, former quarterback of the Denver Broncos. It seemed fitting to invite Manning on stage at Red Rocks, since the amphitheater is only a few miles from Denver.

You could say that Manning is a pro at crashing country stars’ concerts. In the past, Manning has stepped on stage to team up with artists such as Cole Swindell and Kenny Chesney.

Still, nothing could prepare Manning for his “Tennessee Whiskey” duet with Stapleton. He seemed a bit hesitant to sing at first, but Stapleton encouraged him to move forward. Finally, Manning sang part of the song’s chorus loud and clear, and the crowd erupted with cheers.

Go ahead and tune in below to catch a short clip of Stapleton and Manning’s duet! We wonder whose concert Manning will show up at next?

@chrisstapleton and Peyton Manning last night at Red Rocks! Such an amazing show, and it seemed like Manning was loving every minute! #chrisstapleton #redrocks #peytonmanning #icantthinkofanywittyhashtags