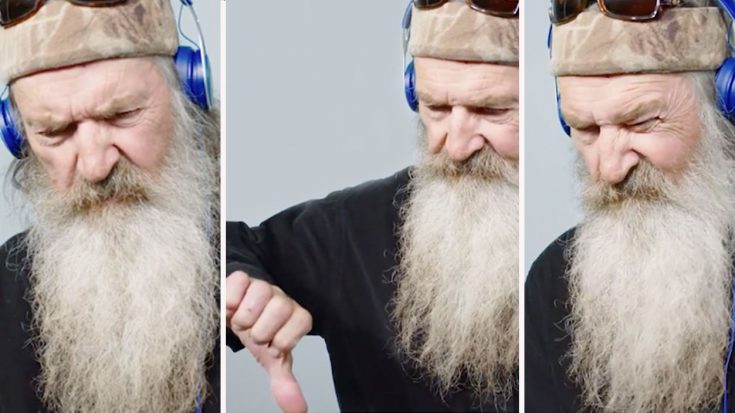 Even if you’re not a fan of Duck Dynasty, you know that the family patriarch Phil Robertson is outspoken and to put it best, fiercely honest. He is not afraid to tell you how he really feels and during this segment with Conservative Daily, he did not hold back.

The entertainment outlet forced him to listen to modern pop and rap music that is all the rage with the younger generation and his reactions are priceless. First up was Demi Lovato’s hit song “Sorry Not Sorry.” After a few bars, he made a hand movement as if he were cutting off his head.

“All I saw of that kind of music basically was butts and boobs,” he said with the entire room in a fit of laughter. The crew introduced the next song to him saying, “This is Eminem.“

“M&M?” Robertson asked. “As in the candy nuggets?”

He quickly found out that Eminem and M&Ms are very different things! After hearing Eminem’s fast-paced song “Rap God,” Robertson said, “That dude did a horrible thing to M&M’s.“

After listening to upcoming rapper Cardi B, he asked, “Whatever happened to Creedence Clearwater Revival?!“

They played Taylor Swift and Beyoncé, two of the highest selling female artists out there right now, and he cut the songs short! Watch the video below to see the rest of his priceless reactions.

Phil Robertson Reacts to Music That Kids Are Listening To

We forced Phil Robertson "The Duck Commander" to listen to the music kids are listening to these days, and here's what happened.