9 Photos Of Indy Feek Through The Years 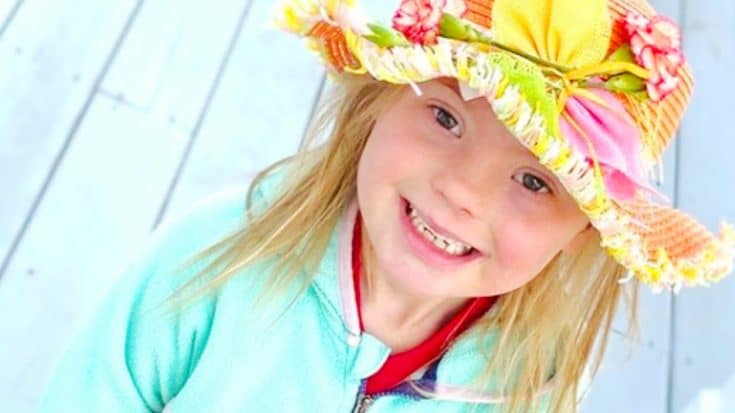 When Joey + Rory Feek were married in 2002, she made it clear that she didn’t want to be a mother. “It’s not that she didn’t like kids, she just never saw herself having any,” Rory wrote on his blog, This Life I Live.

But Joey eventually had a change of heart, and the couple welcomed their first child together on February 17, 2014. They named the little girl Indiana, and took to calling her “Indy” for short.

Since Indy has Down Syndrome, Joey + Rory knew they all had a fair share of challenges to face. They completely devoted themselves to Indy’s care, and Joey intended to homeschool her.

However, Joey’s plans came to a halt when she was diagnosed with cervical cancer in May 2014. She underwent surgery to remove the cancer, and doctors declared the surgery a success. Sadly, the cancer returned, and Joey passed away on March 4, 2016.

Through all of the sad times, little Indy has been the bright ray of sunshine that Rory has needed in his life.

The sweet pictures Rory shares of his little girl have brought so much happiness to us all.

That’s why we’d like to share a few of our favorites with you from some of her earliest years. Look at those two beautiful smiles! Posted in August 2015, this sweet snapshot shows Joey enjoying some quality time with her baby girl.

Believe it or not, Indy was just a little over a year old in this picture. She’s grown up so much since then! Taken shortly after her second birthday in February 2016, this photo of Indy is too cute for words. Rory wrote that she was “trying to figure out how to put on her own shoes and socks” at the time that he captured this photo-worthy moment.

Although Indy didn’t quite get the hang of it, Rory had faith that she would figure it out eventually. “Maybe when she’s three,” he wrote. Rory shared this priceless snapshot in July 2016. It proves that Indy always looks adorable, even when she has a bad case of bed head!

Clearly Rory feels the same, as he wrote some sweet words about his baby girl in the  caption. “There are beautiful mountains and breathtaking landscapes all around us this morning, but all I can do is stare in amazement at this little wonder.” That’s a look of pure joy right there! You can’t see it here, but the reason why Indy was so excited is because she was getting ready to see The Lion King on Broadway.

“This is about to happen!” Rory wrote in the photo’s caption. As if Indy’s expression wasn’t cute enough, she was wearing a shirt that said “Love your papa.” It turns out that Indy is a big fan of all things Disney. Rory took her on a trip to Disney World in September 2016, and she had a blast!

Indy’s friend Scout got the chance to come along, and the two wore matching Minnie Mouse dresses one day. It doesn’t get any more adorable than that! Sadly, Scout passed away in early 2019, making this one of the last photos she ever took with Indy.

Photo #6 – Hanging Out With Ranger Rory was getting around to take Indy to his sister Marcy’s house when he caught this super cute moment. It looks like Indy was having a nice chat with Rory’s dog Ranger (Ranger passed away in 2020).

Seriously, how could anyone look at this picture and not smile? Ranger also made an appearance in this photo that Rory shared in November 2016. Apparently Indy decided that Ranger’s dog bed looked like a nice place to nap. While Indy was happy in her comfy new bed, Ranger seemed less than pleased!

“For some reason Ranger hasn’t warmed up to the idea of us having a two-year old in the house yet,” Rory wrote. Like father, like daughter! Wearing matching overalls and matching smiles, Rory and Indy made our hearts melt with this photo Rory shared in December 2016. Rory shared that he and Joey used to ring in the New Year by spending time down by the ocean. Without Joey there to ring in 2017 with him, Rory decided to keep the tradition going with Indy.

Father and daughter enjoyed their time at the beach, as made clear by the photo Rory shared from their trip. “My ocean view,” Rory wrote, and what a picture-perfect view it was.

We’re so in love with little Indy’s sweet smile, and we’ll be forever grateful to Joey + Rory for sharing her with us all.