Prince Sings For The Muppets In “Hee Haw” Parody From 1997 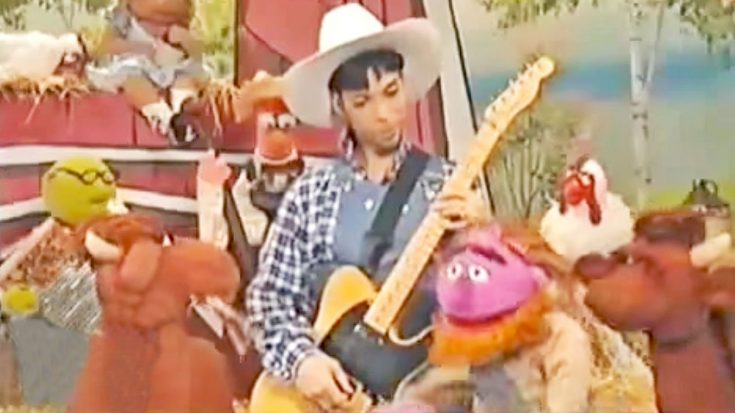 Prince was one of the most influential artists there ever was. While his music followed the veins of funk, pop, R&B, and rock, he managed to make an impact on almost every genre imaginable.

One only needs to look at country stars’ reactions following the news of Prince’s death on April 21, 2016 to realize just how much he meant to the country music. In addition to inspiring countless artists, such as Brad Paisley and Darius Rucker, Prince worked directly with some members of the country music community. Just two examples of his involvement in country music include a performance with Sheryl Crow and a song he secretly wrote for Kenny Rogers.

So while it may have seemed a bit odd when Prince was once looped into a country-style segment on a popular TV program, it wasn’t totally out of place!

In 1997, Prince was still using a symbol in place of his name or was referred to as “The Artist Formerly Known as Prince.” This concept is something that a couple of Muppets poked some good-natured fun at during an episode of Muppets Tonight.

Prince was a guest star on the show that night, and joined the Muppets in a Hee Haw parody segment they called Hoo Haw. In fact, his appearance on the show marked his television debut!

The bit opened with some of the other Muppets dressed in their finest flannels and overalls as they cracked a series of hilariously awful jokes.

Then Prince appeared, dressed up exactly how you’d picture a stereotypical country bumpkin to look. Standing in the middle of a field, Prince had a conversation with Gonzo, who made a comment about the ugly “dog” he brought along with him. When Gonzo asked what Prince called the dog, his response was priceless.

“Well before it’s painted brown and glued ears on him, we call him alligator,” he said.

After that, the gator embarked on a vicious chase after Prince and Gonzo, and sent them running for the hills! The segment then cut to a stage scene, where Prince began to sing a song about mountain trails and bear tracks while surrounded by a bunch of farm animals.

But someone broke the news to him that those bear tracks were actually gator tracks! Sure enough, the gator was looming in the background, waiting to strike. Everyone scattered pretty fast after that!

Tune in below to watch the whole scene unfold in all of its hilarity. You’re sure to get a good chuckle out of it!