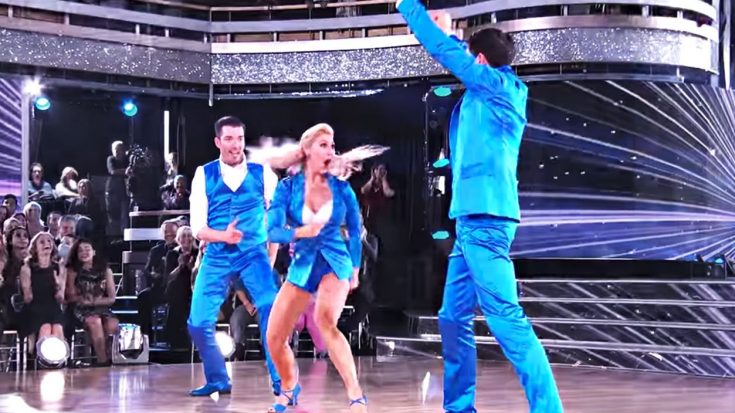 Teaming up with professional dancer Emma Slater, Drew Scott had a secret weapon ready to launch about halfway through their performance that left everyone reeling from surprise!

During Monday night’s Dancing With The Stars episode, the theme was “Most Memorable Year” and to commemorate that, Drew chose 2007 – the year in which he figured out how to combine his two lifelong passions: real estate and starring on television.

Drew had spent many years struggling to make it as an actor while simultaneously partnering with his brother on a successful real estate company, but it wasn’t until 2007 that he realized combining the two would bring him incredible happiness.

“Seeing Drew, my identical twin brother, struggling, it was heartbreaking,” his brother, Jonathan Scott said in the clip. “His spirit was just beaten and broken.”

Dancing along to Queen’s “Don’t Stop Me Now”, Drew and Emma looked dashing in their royal blue outfits and had incredible moves that earned great applause from the audience, but still – no one was expecting them to bring out a third dancer!

As the original pair spun around and the camera panned, their secret weapon and Drew’s twin brother, Jonathan, slid right into the frame, dancing right along with them.

For the rest of their jive, both Scott brothers and Emma Slater worked in unison to steal the show and earn a near-perfect score!

Watch the full clip below and get ready for that hidden surprise!