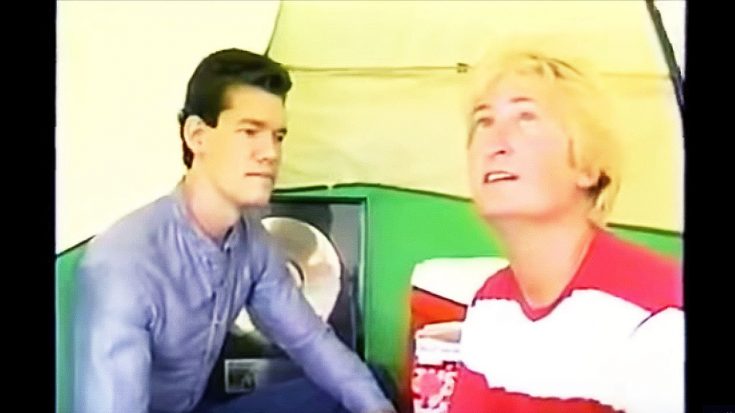 Randy Travis found his rise to fame in the 80s, making his name and time more valuable than ever before. However, when one interviewer made the trek to visit Travis at his home for an exciting meet and greet, he was in for quite a surprise of an unexpected nature, if you will.

Comedian Andy Andrews drove to a remote location that he was certain was the correct address the country superstar had given him, standing by his vehicle beaming a puzzled expression. “I don’t see no mansions around here nowhere,” he says. As if directly on cue, Travis creeps out of the nearby shrubbery and greets Andrews with a chipper “Hello Andy! Come on down!” The singer greets the camera and begins to escort the men to his “place”.

“I’ve been living here for several months,” the singer explains as the camera approaches a green and yellow tent, pitched and ready for use! The audience begins to laugh at the unexpected sight! “I just bought this house a few months ago. Come on in if you’d like to,” Travis gestures.

Andrews awkwardly enters the shelter while curiously peering around the scene, exclaiming, “Well this is,” before bluntly stating “This is a tent!” Travis giggles and assures the comedian “There’s no place like home,” as he kindly offers a beverage from his massive cooler that easily occupied a large portion of the already crammed enclosure. As the singer explains that his furniture has yet to be delivered, although assuring it had been ordered, he kindly asks Andrews, “Did you see the pool out back?”

The two leave the tent and encroach on a blow-up kiddy pool filled with water and a pink inflatable whale to which Travis exclaims, “It’s nice, isn ‘t it?”

The skit gave viewers endless laughs and reminded us of the Randy Travis we grew to know and love! Watch it below!