By Jennifer Pernicano on November 21, 2015
Advertisement 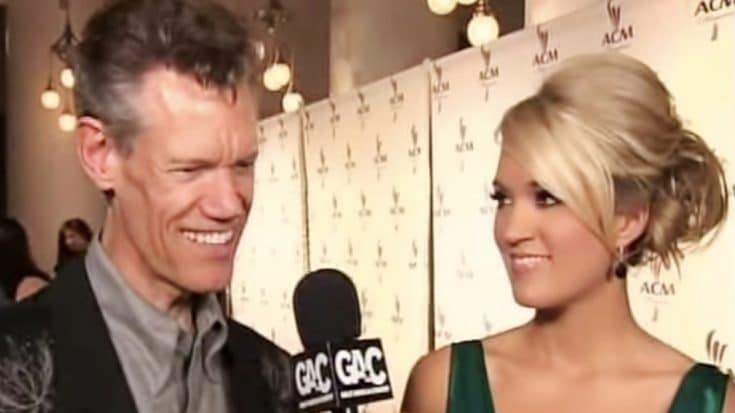 Randy Travis has made a mark on country music that few can compete with. His voice and his songs have stood the test of time, as proven when Carrie Underwood covered his hit “I Told You So” on her Carnival Ride album in 2007.

Underwood had a chance to sing “I Told You So” when Travis was honored by the Academy of Country Music in 2009.

On the red carpet prior to the show, Travis, accompanied by Underwood, recalled the first time he heard Carrie singing his song.

“My wife and I, we’re on the road, we hear this played to me over the phone. And, the only thing I could think to say when we hear it is ‘That was far more suited for her voice than mine.’ I mean, what a performance,” Travis said. “There’s not that many people that can go out and sing live and nail a performance regardless of the sound.  I’ve worked in venues where Carrie was singing and I know how bad the room sounded. I sat back and I’m listening to her go out, and it’s like ‘You’re not right.’”

Underwood, obviously embarrassed by the praise, responded, “It came from all those years of singing your songs. You taught me everything I know.”

“Everything you do, you sing the fire out of.  You sing a country ballad so great. I hope you continue to do some of that on every album you do, because I love the country stuff and I love to hear you sing.”


Carrie Underwood has cited Randy Travis as one of her musical heroes and recalled that she first heard “I Told You So” while listening to one of her sister’s cassette tapes when she was just a kid. Little did she know that one day she would team up with Randy Travis for a Grammy-winning performance of that very song.

In addition, Travis would be the one to extend an invitation for Underwood to join the Grand Ole Opry in 2008.