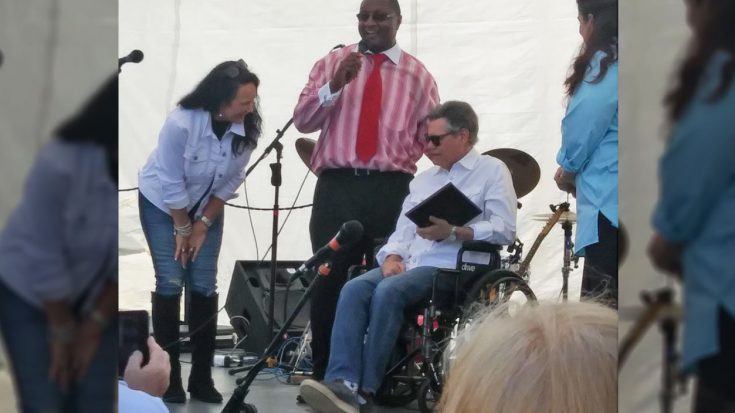 Many people gathered in Marshville, North Carolina for the unveiling of a new highway sign dedicated to country legend and hometown boy Randy Travis.

Motorists on a Marshville highway will now see a brand new sign that reads, “Home of Randy Travis” every day on their commute. The town did have an old sign dedicated to Travis, but took it down due to disrepair, according to The Charlotte Observer.

The town’s mayor, Franklin Deese, said fans began calling him right away asking why the sign was no longer there.

“I didn’t know so many people from all over the country could find my phone number,” he told the crowd. “They wanted to know: Why did you take the sign down that this was the home of Randy Travis?“

As well as posting a brand new “Home of Randy Travis” sign at the east and west entrances of the town on the U.S. 74 , Deese also gifted the legend with the keys to the city.

Travis, who suffered a debilitating stroke in 2013, sat on the stage in his wheelchair and was joined by his wife, who was on the brink of tears during her speech.

“Thank you so much for your kind words and your open arms. There’s not many places you can go back to after 58 years and have that same kind of warm feeling,” she said. “I’ll tell you, he’s an awful special man from a very special place. Thank you for honoring him today and allowing him to be the son of Marshville.”

Travis was handed the microphone and said four short, but powerful words.

“Thank you very much,” he said.

The response from the crowd was “roaring excitement,” according to Marshville Chamber of Commerce member Kay Strawn.

Watch Mayor Deese’s dedication to Travis in the videos below.