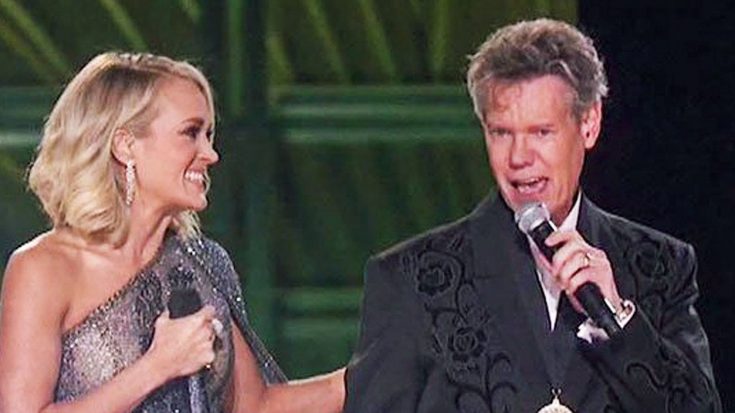 Leading up to the 2016 CMA Awards, we knew Randy Travis had a role in them, but we had no idea he was going to be the shining star of the opening number.

In 2013, Randy suffered a massive stroke that left him unable to speak or sing. Country fans and artists alike thought that they’d never get the chance to hear him sing his iconic songs like “Forever and Ever, Amen” ever again.

But when he took the stage at the CMA Awards, Randy proved that miracles can happen. A few weeks earlier, during his induction at the Country Music Hall of Fame, Randy stunned everyone when he sang part of “Amazing Grace.”

That Hall of Fame performance was only the second time Randy had performed in public since his stroke. The first was during a private funeral in February 2016.

With his CMA Awards performance, Randy managed to touch the hearts of country fans around the world when he joined his fellow legends and today’s artists. Standing next to co-hosts Carrie Underwood and Brad Paisley, Randy listened to everyone else sing “Forever and Ever, Amen” as he stood by with a huge smile on his face.

Then Randy made us smile and cry at the same time when he concluded the opening by singing the final line of the song. The crowd was on its feet, rewarding him with a standing ovation he more than deserved.

Tune in below to watch the touching moment that Randy sang at the CMA Awards. We couldn’t think of a better way to open the show…

#CMAawards50 "Forever and Ever, Amen"

12 of Country's favorite songs IN THE FIRST 10 MINUTES! Watch #CMAawards50 NOW on ABC!