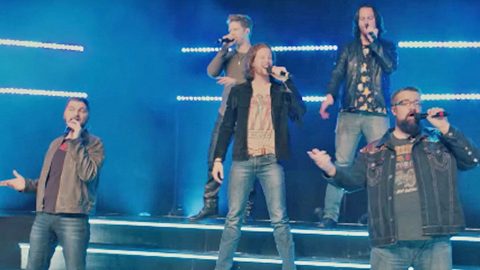 In 2013, country a cappella group Home Free emerged on the scene by winning the fourth season of The Sing-Off. During that season, they performed country classics including “Ring of Fire” and upbeat remakes of songs like “Life Is A Highway.”

Throughout the years since their victory, Home Free has taken the music world by storm with several albums and a huge following. They also delight their fans with incredible music videos, and over four years since they sang the song on The Sing-Off, we finally got a music video for their harmonious version of Rascal Flatt’s “Life Is A Highway.”

In the music video, the vocal group takes you on a fun and thrilling ride along as they travel from city to city on their 2018 Timeless World Tour. Before they appeared on The Sing-Off, they played 200 shows a year. Years later, they still do a lot of touring, so you can imagine how much great footage they got for this video.

Tenor Austin Brown took the lead for most of the song, while bass singer Tim Foust got his turn to shine in the bridge and percussionist Adam Rupp took center stage for an epic beat-boxing solo.

The video takes us basically through a day in the life of Home Free, from driving in the tour bus, sound check, meet and greets, and finally, the live show. There is a sweet moment between Foust and his wife, who looks like she’s on the road with them and also baritone Rob Lundquist FaceTiming with his wife and daughter.

Take a look at the fun video for “Life Is A Highway,” and if you’ve been to a show lately, you might even see yourself!