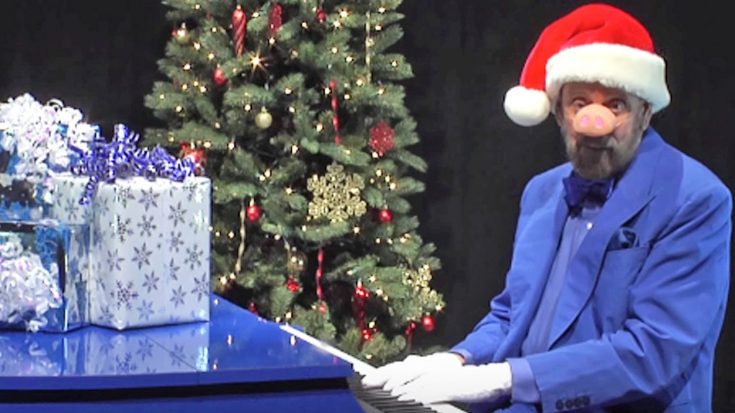 The wonderful and talented Ray Stevens has made a name for himself being the Comedy King of Music City, incorporating his hilarious lyrics into country-style songs.

In 2012, Stevens tried his hand at one of the funniest Christmas songs to ever be recorded, “Blue Christmas.” Now, we know what you’re thinking. This isn’t Elvis Presley’s swoon-worthy version of “Blue Christmas.” Where’s the humor in that?!

Stevens does his best Seymour Swine and The Squeelers version of “Blue Christmas”. A lot of people think that this version of the song is sung by Looney Tunes’ Porky Pig, but it is in fact by Denny Brownlee, an actor, voiceover artist and musician, as his character “Seymour Swine.”

Stevens sings the song, like Brownlee did, wearing a pig nose and hysterically stuttering while singing. He performed it sitting at a blue piano and the video is intermixed with pictures of pigs. At one point, Stevens seems to be singing to one of his good pals, who was turned into sausage!

Brownlee’s version was first released in the mid-1980s and it became the No. 1 requested holiday song in big markets including Atlanta, Miami and Nashville. Shortly after that, it became a national hit and then an international hit. People loved a stuttering pig singing “Blue Christmas”! Who knew?!