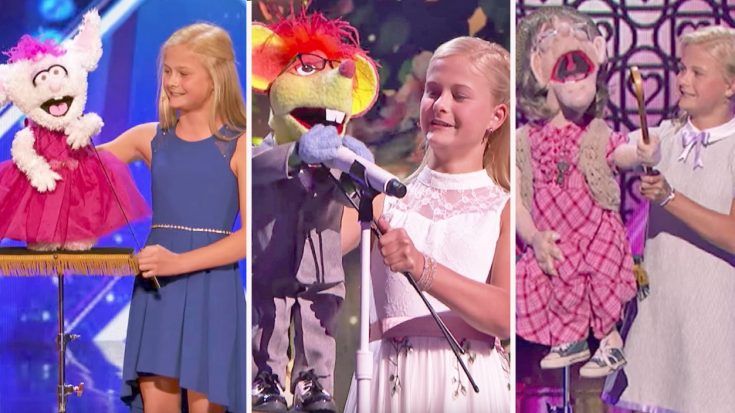 The 12th season America’s Got Talent had to be one of the best yet. In September 2017, the remaining ten acts took the iconic Dolby Theater stage to deliver their final performance.

Not many people were surprised when the Season 12 winner was announced. That person took home $1 million as well as starred of their own act in Las Vegas. The winner was Darci Lynne, who is just 12 years old! Once a quiet child, Darci took up ventriloquism to get over her shyness. Just a few years later, she’s performing for millions of people on national television!

Let’s take a look back at all of her incredible performances on America’s Got Talent.

During her first audition in front of the judges, Darci told Simon Cowell, Howie Mandel, Heidi Klum and Mel B. that she was auditioning for the show because she wanted to help “keep ventriloquism alive.”

Ventriloquists audition for AGT every once in a while, but a singing ventriloquist?! We haven’t seen one since Terry Fator in Season 2. Darci introduced her puppet, Petunia, who sang “Summertime,” and impressed Mel B. so much that she pushed the golden buzzer, sending the pre-teen straight to the live shows!

Many weeks had passed since fans of the show saw Darci perform because she received the golden buzzer, allowing her to skip to “Judge Cuts” round. When she did make her return to the stage, she brought a new friend with her, Oscar.

Oscar is a nervous mouse with a huge crush on Mel B., so to show the former Spice Girl how much he liked her, he sang the Jackson 5 hit “Who’s Lovin’ You” and dedicated it to her.

Once again, Darci wowed the judges, the audience, and everyone at home with her incredible talent. With this new puppet, she was able to show off another voice she had up her sleeve.

At the results show, it was no surprise that America voted her through to the semifinals.

After her successful performance with Oscar during the quarterfinals, Darci introduced us to a new puppet, an elderly lady named Edna, who has the hots for Simon Cowell!

Edna serenaded him with “(You Make Me Feel Like) A Natural Woman,” and even cozied up to him, causing the British judge to turn bright red! During the results show, she was one of the first acts announced as an AGT finalist!

Darci has performed with three different puppets, so fans really had no clue who was going to show up for her finale performance. She shocked us all when both Petunia and Oscar joined her.

The two puppets bickered over who was going to be singing, seeing as they both helped Darci get to this round of competition. Settling on singing together to The Beatles classic “With A Little Help From My Friends,” Darci pulled off a seemingly impossible feat, mastering two different voices, three if you include her own, for an incredible finale performance.

The judges, and the entire theater, gave her a standing ovation. They praised her performance, with Simon saying she could have just won herself the million dollars!

During the finale episode, Darci performed with America’s Got Talent’s Season 2 winner Terry Fator for an incredible duet! The performance involved Darci and her puppet Petunia, along with Fator and his singing turtle puppet, Winston. After saying some funny jokes, they sang, “Anything You Can Do.”

We love Darci Lynne and Terry Fator! We’re so glad she won the show!