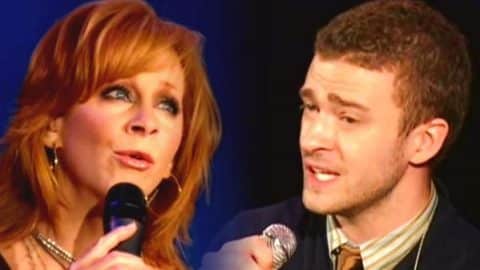 After Reba McEntire finished up her Las Vegas residency at the Las Vegas Hilton in the early 2000s, she started putting a wish list together of all the singers – in country and pop genres – that she would like to sing a duet with. And that’s when an idea was born.

McEntire and Timberlake were put in contact by actress Joanna Garcia, who played the country legend’s daughter Cheyenne in the sitcom Reba.

Garcia was dating Timberlake’s best friend and connected the two. They eventually met at the 2007 Grammy Awards where she asked him to work with her on the album. He asked her if he could write a song for them and she had no clue what to expect! He brought her a song he wrote with musician Matt Morris called “The Only Promise That Remains” and McEntire loved it. Watch them both talk about how the song came to be.

They each recorded their parts on March 17, 2007, and it went on the album. The unlikely duo was able to perform the song live just one time on The Oprah Winfrey Show on September 19, 2007. Even though this particular song didn’t chart on the Billboard Hot Country Songs chart, the entire album debuted at number one on the Billboard Top Country Albums chart as well as the all-genre Billboard 200.

Watch her and Timberlake sing their duet in the video below.