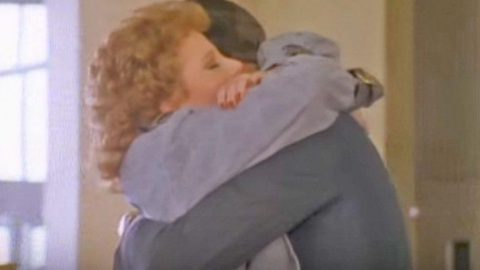 The lingering fear that the person you love most can leave you at any moment can be one of the most agonizing feelings in the world. Telling the heartbreaking tale of a woman’s ultimate fear becoming a reality, Reba McEntire delivers tears with her critically acclaimed “Whoever’s In New England.”

Posted by Whoever's In New England by Reba McEntire on Friday, March 16, 2012

The video for her heart-wrenching country song features an aching Reba at home alone, stricken with anxiety as her husband leaves week after week to Boston “each time duty calls.”

As Reba sings, she starts to see through her husbands lies. Just then, when it seems as if all hope is lost for her husband to remain her own, he has a change of heart and leaps back into her waiting arms.

“Whoever’s in New England” was released in 1986 as the premiere single for her album of the same name. The No.1 hit is widely considered her signature song in addition to her breakthrough single. In 1987, Reba won a Grammy Award for Best Female Country Vocal Performance for the song.

“Whoever’s in New England” would go on to be the first of many chart-topping hits for the red-headed beauty. Since then, Reba has acquired 42 No. 1 singles and 16 No.1 albums. Today being labeled as one of the best-selling artists of all time, she hasn’t slowed down.

You can watch the heartbreaking video below.