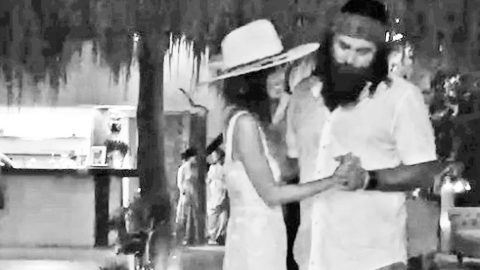 She is included in every family activity and is considered their daughter, and a sister to John Luke, Sadie, Bella, Little Will, and now, Rowdy.

The 27-year-old recently got married on December 3 to John Reed Loflin in a bohemian wedding in Tulum, Mexico. Because Willie Robertson has been her father figure the past ten years and because she calls him Dad, he walked her down the aisle, which had everyone in tears.

Rebecca’s biological father passed away many, many years ago, so the moment was even more emotional for the family. Willie’s job wasn’t over after he gave away his daughter; they still had the father-daughter dance at the reception.

Rebecca shared their dance with the world on Instagram and it warmed our hearts. At first, their dance was very traditional, and we can’t lie, we teared up!

After a few meaningful sways back and forth, Willie and Rebecca put on a show! They traded headpieces, with Rebecca now wearing Willie’s bandana and Willie wearing Rebecca’s hat!

Their song transitioned into James Brown’s “I Feel Good” and there was some hilarious dance moves going on! Willie set down Rebecca’s hat and pretended it was a campfire, he acted like he was going to jump into Rebecca’s arms like the famous move in Dirty Dancing, and then he lifted Rebecca up!

Watch the two videos of their dance below!

Part I, Our father & daughter dance was one of my favorite moments from the wedding, this dance really described our relationship, love you Dad ❤️ #loflinweddedwife