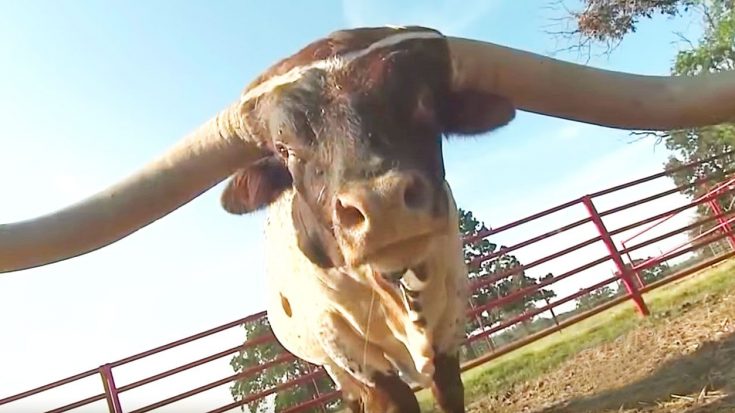 Texas Longhorns certainly live up to their names. But as impressive as most longhorns’ horns can be, one bull has them all beat.

At nearly seven years old, a longhorn named Cowboy Tough Chex is already a world record holder. He currently holds the Guinness World Record for being the longest horned bull in history.

According to the Forth Worth Star-Telegram, Tuff’s horns measure 101 inches from tip to tip. You would think that someone with a record-setting bull would want to hang on to him forever, but that was not the case when it came to Tuff!

Tuff’s former owner, Bob Loomis, decided to put his record-breaking bull up for auction on Friday (September 22) at the Hudson Valentine auction at the Fort Worth Stockyards. He figured Tuff would draw in a hefty sum, estimating that the final bid could be as high as $500,000.

Going into the auction, Richard and Jeanne Filip knew the competition for Tuff would be fierce. The couple was determined to leave with Tuff that night, with Richard saying he was willing to bid as much as $1 million on him.

Jeanne knew that her husband was serious, telling the Star-Telegram, “Richard rarely bids and drops out.”

As the bidding started and the price kept climbing, Richard said he never had second thoughts about what he was doing. But he admitted that he was having a bit of a tough time justifying such an expensive purchase.

Luckily for Richard, he never had to come close to making his maximum bid of $1 million. In fact, Tuff didn’t even bring the $500,000 that his original owner had estimated he would.

So how much did Tuff sell for? Although it wasn’t as much as anyone guessed, the bull still sold at an eye-popping price…$165,000.

Richard’s determination made him and Jeanne the proud new owners of Tuff. They aren’t going to take their responsibility lightly, and Jeanne says he will definitely be the star of their longhorn herd.

“Our guys will know: You do not make Tuff do anything he doesn’t want to do,” she said. He’s the VIP of the ranch.”

Tune in below to watch a video about Tuff’s sale. What an impressive animal!