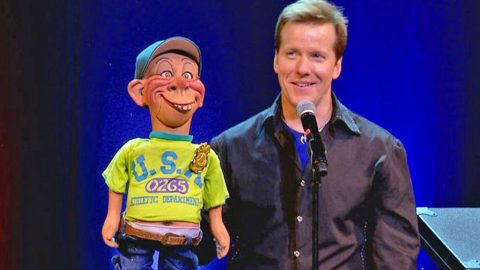 Jeff Dunham: All Over The Map

America’s favorite redneck is back and funnier than ever! The hilarious Bubba J met up with his best buddy Jeff Dunham to discuss the secret details of his white trash marriage to his beautiful blushing bride.

“Where’d you meet you wife?” Dunham asked Bubba who responds hysterically, “At the family reunion!”

The lovable redneck then details how he and his wife met, all the way down to the first time he laid eyes on her leaning against a ferris wheel with a corndog and Budweiser in hand. Young Bubba walked right up to his soon-to-be wife and told her, “Young woman you look more delicious than mayonnaise oozing out of a ham sandwich!”

Clearly, the feeling was mutual and the two embarked on a whirlwind romance for the ages leading up to the young lady’s father strongly suggesting they get married. Why was her father so taken with the idea of their marriage you ask?

“I was supposed to pick her up one night at 7 o’clock and got there about 7:30, and her daddy was on the front porch with his shotgun and said, ‘Bubba J! Guess who else is late?’”

Taking the suggestion of his future father-in-law seriously, the two had a quickie wedding at the local Walmart, so as to make it “easier to return the gifts.”

You can hear the hilarious skit below!