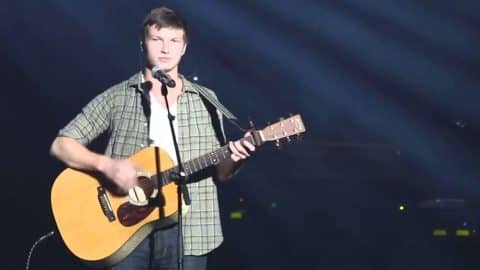 Performing in front of an arena full of people must be nerve-wracking, but Duck Dynasty star Reed Robertson was up for the challenge when he was the opening act at PGA champion Bubba Watson’s annual event, Bubba’s Bash.

According to their website, Bubba’s Bash is an annual fundraiser that is a “fun way to support organizations within [Watson’s] communities…The local charities benefiting from the event include The Children’s Hospital at Sacred Heart, The YMCA of Northwest Florida and Santa Rosa Kids’ House.“

In 2015, Watson asked the young aspiring musician to be an opening act, and Robertson happily obliged. Performing Leonard Cohen’s masterpiece, “Hallelujah”, Robertson captivated the audience from the first note he sang.

After this performance, Robertson should be used to performing in front of thousands of people. And good thing because he is going on tour with his cousin, Sadie, for her Live Original Tour, which kicks off on September 22.

There will be other bands joining them on tour, but who knows, maybe you will see him perform his beautiful rendition of “Hallelujah”.