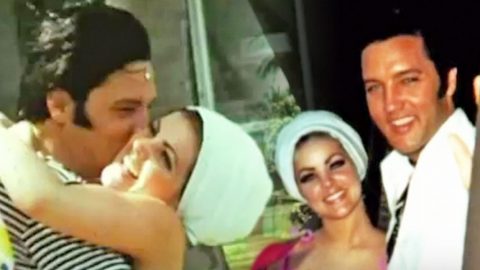 Priscilla and Elvis Presley’s love story was one of the most documented relationships of their time. They met when Priscilla was just a teenager and after a few years, she moved to Graceland to be closer to her future husband during her senior year of high school.

They were married in 1966, and had a daughter, Lisa Marie, in 1968. Although the tabloids often tried to say they were unhappy from the start, this compilation of clips proved otherwise.

Set to the heartwarming Phillip Phillips song “Home”, footage of Priscilla and Elvis’ early years are documented and it will make your heart skip a beat. In some of the clips, the couple looks so infatuated with each other, making us wonder what went wrong.

Real-life set in and they did end up divorcing in 1973, but they remained close friends, even exiting the courthouse the day of their divorce hand in hand.

Even though their marriage didn’t work out, you can tell there was real love between them, thanks to these videos. Some of the footage includes outings with Lisa Marie, vacations, photoshoots, their wedding day, and so much more.