By Miranda Raye on August 15, 2016
Advertisement 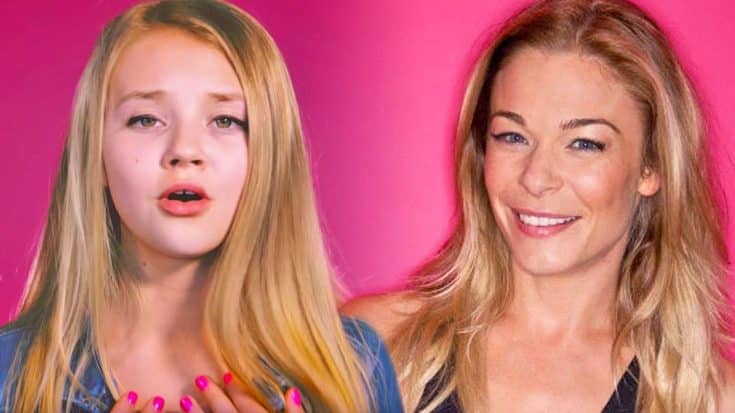 LeAnn Rimes was only 13 years old when she recorded Bill Mack’s song “Blue.” That one recording placed her on the path to country stardom at a young age…a path which led to her becoming the youngest Grammy winner of all time.

At only 12 years old, Tegan Marie is proving that she could not only be the next young star in country music, but the next big star period. The talented young girl has been dazzling her online followers for years with her remarkable covers of country artists including Carrie Underwood and Sugarland.

In June, Tegan recorded a cover of Florida Georgia Line‘s “H.O.L.Y.”, and it went viral. With millions upon millions of views, Tegan suddenly found herself with a wealth of new fans and opportunities. She recently sang the National Anthem for the U.S. women’s soccer team and thrilled the thousands of fans packed in the stadium there.

New fans of Tegan’s are just starting to discover some of her previous covers, and if you haven’t seen her version of “Blue” before, then you need to. Tegan recorded her rendition of LeAnn’s classic hit back in May, and fans praised her for her angelic voice.

Beyond sounding like an angel, Tegan showed in this video just how talented she really is. The way that LeAnn sang “Blue” is iconic, but it is also difficult to do while still maintaining power and clarity in your voice. Tegan manages to do both, and that is the number one thing that makes her version so outstanding.

With a voice and a talent like this, we feel that Tegan is destined for great things in the future. Her star continues to rise because of stunning covers like this one. See and hear for yourself in the video below.

Tegan has proven she can sing the classics and more modern hits. We think she’d do great with a Patsy Cline song! How about you?