Rodeo Clown Brings Woman Into Arena, But When A Man Kneels Behind Her…The Crowd Loses It! 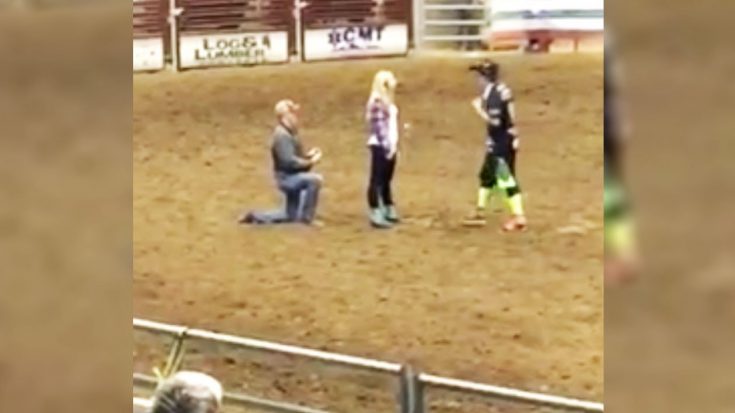 An unsuspecting young lady got the surprise of a lifetime when she was chosen out of everyone to come play a little game with one of the most famous rodeo clowns!

JJ Harrison is known for his hysterical clown antics, spectacular dancing, and unforgettable rodeo shows that he performs coast-to-coast, but during this particular event he had lined up something even more amazing.

During the Hight Desert Stampede in Redmond, Oregon, Harrison worked out a plan with a young cowboy to propose to the woman of his dreams in the most epic of ways!

Bringing out the young lady from the crowd, Harrison pretended to “randomly” select her for a fun little game they’d play in the arena.

Starting off, he told her to mimic everything he did and that they were about have a dance competition to see if she could keep up with him. Little did she know, but this was all a giant ruse to keep her distracted while her boyfriend set up for the biggest surprise of her lifetime!

As both she and Harrison begin to dance to the emcee’s beats, the clown throws a few cues to her awaiting boyfriend, but he clearly didn’t see it. After going on for a minute longer, you see him appear out of the corner and sit down right behind her taking one knee and pulling out his ring box.

In a moment that can only be described as heartfelt and beautiful, the music changes from upbeat dancing to Train’s beloved hit, “Marry Me”. It was then that JJ Harrison gets her to turn around where she finally spots her boyfriend!

Watch this stunning moment in the video below!