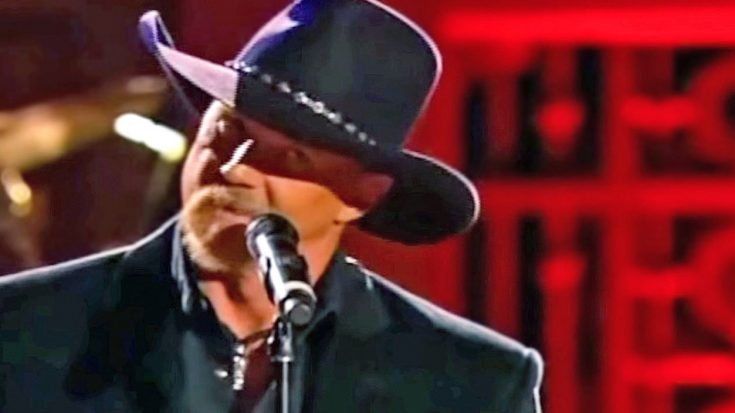 Out of Roger Miller‘s immense catalog of music, he is perhaps best known for the 1964 single “King of the Road.” Written by Miller himself, the song tells the tale of a hobo who travels from place to place.

Even though he’s poor, the hobo realizes that he’s as rich as he can be. He has the freedom to go wherever he wants whenever he wants, making him feel like he is the “king of the road.”

Audiences reacted well to the song that has now become known as Miller’s signature tune. The song climbed to the top spot on the charts in several countries, and also broke into the top five on the Billboard Hot 100.

The song also received the Grammy Award for Best Country Song in 1965, along with four other awards. Decades later, the song remains a beloved part of country music history.

In 2006, Cracker Barrel hosted a Country Songs of the Year concert to honor great works such as “King of the Road.” Since Miller passed away in 1992, country superstar Trace Adkins stepped up on stage to sing the song in tribute to him.

Adkins delivered a smooth-as-honey rendition of the song, with his deep voice flowing through each word. Beyond the pure sound of his voice, we have to commend Adkins for how well he told the song’s story. His storytelling abilities were showcased to the highest degree in this performance, making it an extreme joy to watch.

Seriously, just close your eyes, hit play on the video below, and find yourself lost in Adkins’ story of “The King of the Road.” Miller would be awfully proud.

While “The King of the Road” is kind of one big story, Adkins’ new single “Lit” is a bunch of little stories packed into one dynamite of a song. In “Lit,” Adkins sings about everything from a grandfather fishing with dynamite to a grandmother getting drunk and yelling at the top of her lungs during Bingo.

The whole point of “Lit” is to celebrate the moments in life that make you feel like you’re on fire with energy and excitement. Now it’s time for you to fire up the song’s lyric video below! Then when you’re done, be sure to head over to iTunes to download the song here.