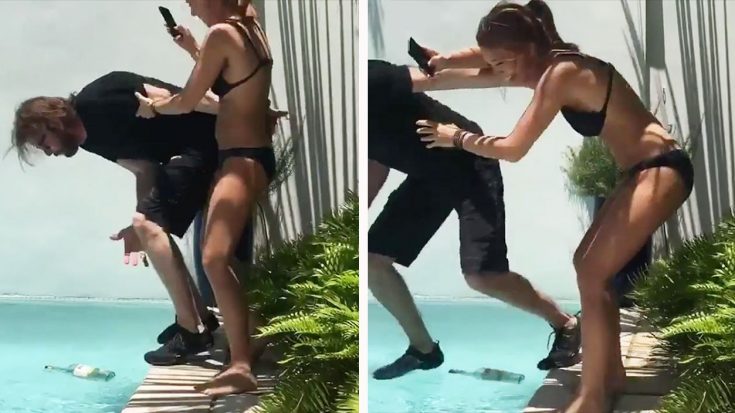 Country star Ronnie Dunn was forced into an unwanted splash in the family pool when his daughter, Haley, saw her opportunity to score some serious payback.

One half of country duo Brooks & Dunn made his way to the edge of the water, his daughter was close behind with her camera in hand!

Dunn placed a wine bottle in the water, expecting his daughter to capture personal footage for the singer. However, the country boy soon found himself fighting to gain his balance on the edge of the pool before splashing in!

“S***!” he yelled as plunged straight into the crystal-clear water!

His daughter was all laughs as she captured the unexpected moment on her handy phone.

“My phone was in my [expletive] pocket,” the country star sternly spoke. “No, it’s not. I took it out,” Haley laughed, calling her father on his bluff.

“You’re so dead,” Dunn joked, although amused by the surprise swim his daughter had imposed.

Be sure to check out the hilarious family moment below.

RD gets punk'd by @littlemissdunnshine !!! RD