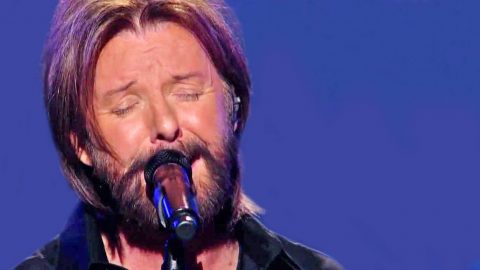 After Brooks & Dunn disbanded in in 2010, Ronnie Dunn took off on a new phase of his career. He released his debut solo record in 2011, which produced the Top 10 single “Bleed Red.”

Dunn has since released three more solo albums, one of those being 2016’s Tattooed Heart.

A third single, “That’s Why They Make Jack Daniels,” reached the 51st spot on the chart.

Another Standout On The Album

Dunn never released a fourth single off of Tattooed Heart, but if he did, we wish it would have been “I Worship the Woman You Walked On.”

Written by Bob DiPiero, Mitzi Dawn Jenkins, and Tony Mullins, “I Worship the Woman You Walked On” is narrated by a man who loves a woman that just got out of a bad relationship. The man addresses the woman’s ex-lover in the song, blaming him for her broken heart:

It’s clear that the lyrics are compelling enough on their own, but Dunn’s performance pushes the whole song into overdrive.

This Will Speak Straight To You

He takes on an almost conversational-like tone in the song’s verses, making it seem like he’s talking directly to any man who has ever broken someone’s heart.

The chorus exhibits Dunn’s talent on another level, as his voice grows in volume and intensity. Crooning out each word in his signature style, Dunn brings great dynamic to the already powerful song.

Words can’t begin to do any justice to Dunn’s performance in “I Worship the Woman You Walked On.” So we’re going to let you take it in yourself. You can catch its official lyric video below.

What do you think of “I Worship the Woman You Walked On”? Would it be a good single for Dunn? We sure think so!