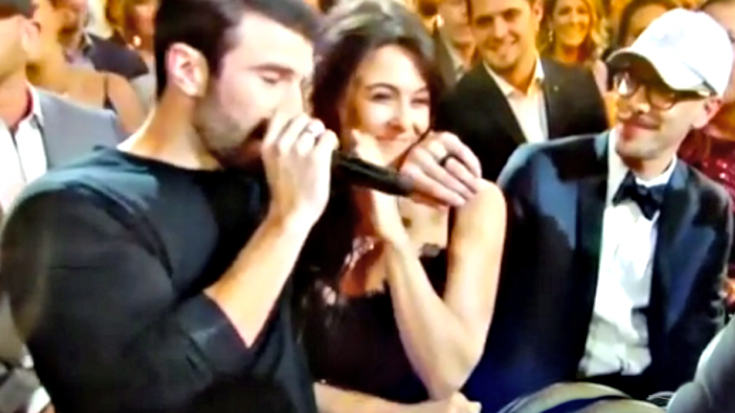 Sam Hunt heated up the 2017 ACM Awards with a fiery performance of his latest hit single “Body Like A Backroad.” The performance kicked off with the country heartthrob sitting on a couch reminiscent of the back seat of classic cadillac singing the lyrics of his country ballad while road signs flashed across the stage.

Midway through his performance, the country crooner made his way into the audience where his bride-to-be, Hannah Lee Fowler, was seated in the audience. Hunt then proceeded to sit next to his blushing fiancé while singing the lyrics of the song she inspired. Fowler looked slightly embarrassed during the performance, this award ceremony marking one of their first public appearances as a couple.

“Body Like a Backroad” is Hunt’s second song released in 2017 as the followup to his deeply personal song “Drinkin’ Too Much” he dropped unexpectedly on New Years Day.

“I’ve been writing songs over the past, I guess, year and a half, trying to conceptualize a new record, and it kinda started taking a heavy direction, and I sat down at one point and was like, ‘Okay, I’m gonna lighten this up a little bit, it needs a lighter flair,’” Hunt said according to The Boot. “[“Body Like a Back Road”] sort of swings, and hopefully it’s easy to listen to and will put a smile on some folks’ faces.”

You can check the adorable moment below!