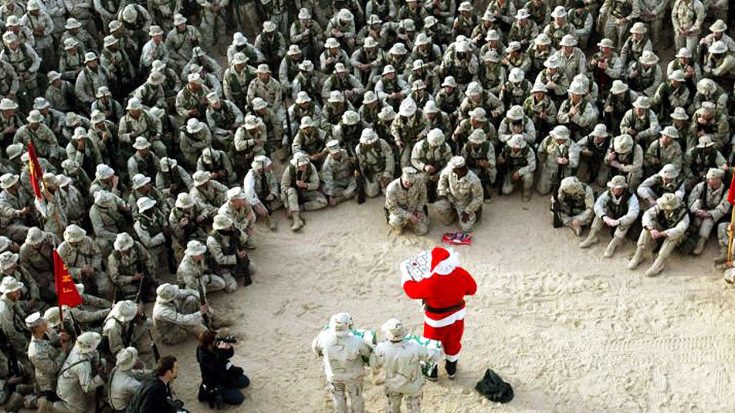 Santa took action into his own hands when he reconstructed the classic poem “Twas The Night Before Christmas” and humbly recognized men and women of military service. The ode began with a chilling, yet familiar intro similar to the original version, although quickly transitioning to an unfamiliar wording that instantly broke the hearts of listeners. “‘Twas the night before Christmas, he lived all alone, in a one-bedroom house made of plaster and stone,” Santa spoke.

The poem begins to describe the lonely scene that the once jolly man had embarked on, expressing his sadness for the lack of a tree, tinsel, or presents. Rather, the bleak home was decorated with sand-filled boots and various medals and awards of all kinds as Santa soon became aware that he had entered the home of a soldier.

Santa describes, “The soldier lay sleeping silent, alone. Curled up on the floor in his one-bedroom home. His face was so gentle, room in such disorder. Not at all how I pictured a U.S. soldier.” He heartbreakingly admits, “In the morning around the world, children would play. Grown-ups would celebrate a bright Christmas day. But they all enjoyed freedom, each month through the year, because of soldiers like the one lying here.”

Growing painfully aware that this man was not the only individual spending his holiday not only alone, but amidst no holiday cheer, Santa begins to cry for the men and women enduring such difficulty. The soldier awakes and assures the man, “Santa, don’t cry, this life is my choice. I fight for freedom, I don’t ask for more; My life is my God, my country, my Corps.”

The soldier asks Santa to carry on, for he is already running late and children were to be awaiting there presents. After blessing the brave man, he continues on his way with the newfound appreciation not only instilled in his heart, but ours as well.

Listen to the passionate, and incredibly sad, poem below and be sure to pray for those who remain away for the holidays.