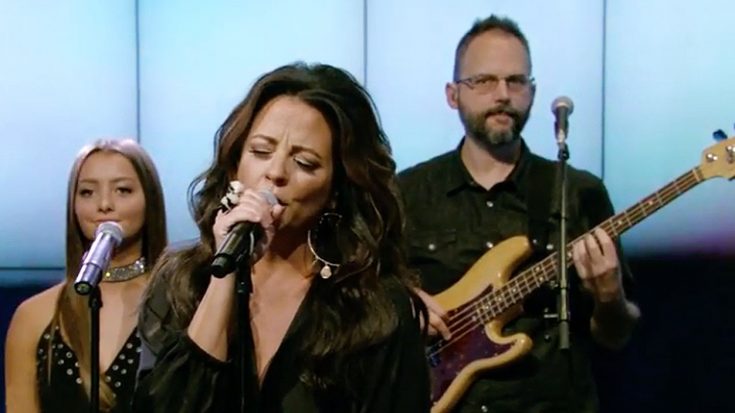 Country star Sara Evans had a “mini-me” on stage during a performance of her newest song that had fans head-over-heels for this remarkable mother and skilled vocalist.

Singing her newly released song “Marquee Sign”, Evans graced audience members of Live With Kelly & Ryan with a countrified performance that scolded those time-wasters that once preoccupied our love lives. Also showing off her talented genes, Evans’ 14-year-old daughter Olivia served as an incredible backup vocalist for her famed mother.

“If you woulda been lit up like a marquee sign/ Coulda saved myself some wasted time/ From the minute I found you/ If it’d been written out in black and white/ Maybe then I would have told my mind/ Not to get wrapped around you,” Evans sang. Olivia provided the performance’s angelic backup vocal alongside her aunt, proving that this music bug is no doubt hereditary.

The singer’s band is compiled of family members beyond her daughter, as her brother mans the drums and both her sisters have lent their vocals for performances and her recently released album Words. Olivia was also included in the song’s original track, sharing her voice to perfectly coincide with her mother’s. Be sure to check out their performance below!