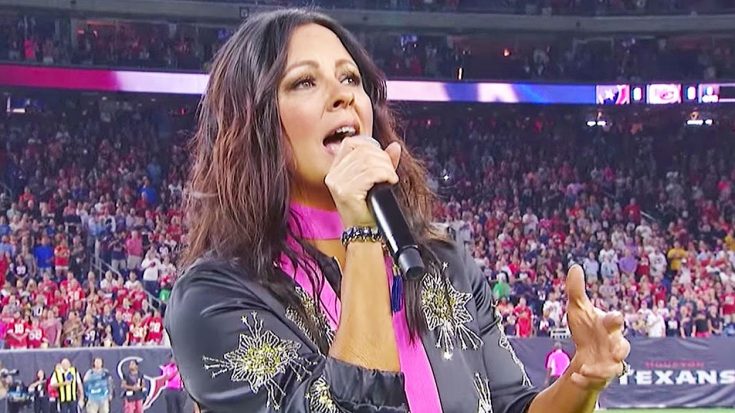 Since she made her debut in 1997, Sara Evans has been one of the most highly respected female artists in country music. Her powerful voice and extensive range has captured the attention of country fans far and wide, earning her a total of five number one hits and millions of records sold.

Evans’ most recent record is titled Words, which she released independently through her own record label, Born to Fly Records. Released in July 2017, this album totes the lead single “Marquee Sign,” as well as an acoustic version of Evans’ previous hit “A Little Bit Stronger.”

Since the album’s release, Evans has been on tour in support of it. On Sunday night (October 8) she managed to find some time in her busy schedule to perform the National Anthem during an important event…the annual Pink Ribbon Day Game for the NFL.

Each year during the month of October, the NFL hosts the Pink Ribbon Day Game to promote breast cancer awareness and also to celebrate those who have fought the disease. This year’s game took place at NRG Stadium in Houston, Texas, as the Houston Texans played against the Kansas City Chiefs.

Taking to Instagram, Evans wrote that it was “an honor and a privilege” to perform the National Anthem at the Pink Ribbon Day Game this year. She also expressed her gratitude to the Texans “for being such wonderful hosts.”

Everywhere you looked in the crowd, you could see people sporting pink ribbons and other pink attire in support of breast cancer awareness. Evans accented her own outfit with a bright pink ribbon, which she wrapped around her neck like a scarf.

Evans’ performance of the National Anthem was just as vibrant as the ribbon she wore. Her voice reached for the stars, as she hit the highest of high notes with absolute ease.

There were several points throughout Evans’ performance that the crowd couldn’t help but cheer, because they were simply that impressed by her display of talent. By the time she finished, the entire stadium was erupting with a thunderous round of cheers and applause.

We’d say that Evans more than earned such a response, because her performance was that good! See and hear for yourself in the video below. It gave us goosebumps!