By Miranda Raye on December 7, 2017
Advertisement 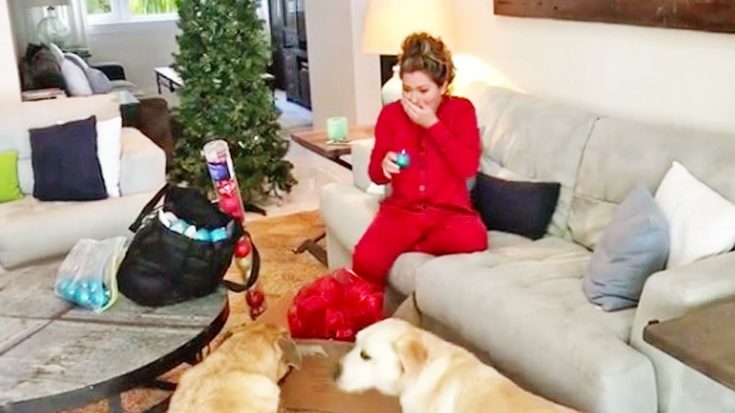 Since country stars are famous, we often forget that they are real people too. Just like us, sometimes country artists love nothing more than hanging out at home in their pajamas with their pets.

This is something that Shania Twain definitely enjoys doing, as she demonstrated in a video she shared with her fans on Wednesday (December 6). Wearing a red onesie with a buttoned front and a paw print detail, Twain looked as cozy as could be as she prepared to speak to her fans about some special holiday gifts.

Twain’s two canine companions joined her for the video message, and took up a spot on the rug next to a box of Christmas decorations. It seemed like an innocent sight at first, but it quickly turned a bit scary.

Apparently, Twain’s dog Jett thought that some of the Christmas decorations looked like tasty treats, and he decided to munch on them. Twain caught him in the act in the middle of filming her video, and leapt off of her couch in mild terror to try and stop him.

“Oh my God no!” Twain exclaimed as she tried to stop the sneaky pooch. “Jett no, no don’t eat that!“

Twain thought she managed to stop Jett, so she felt safe to return to the couch and finish her video. But that sense of safety only lasted for a split second, because Twain realized that Jett was still chewing on something!

“Oh no!” Twain screamed before she lunged toward Jett again. This time something dropped out of his mouth, and it turned out to be a bulb from the string of Christmas lights!

Finally able to breathe a sigh of relief, Twain held up the light in front of the camera, saying, “There’s one Christmas tree light, gone!” We hope Jett didn’t eat more of them!

You can watch all of the hilarity unfold as Twain struggles to handle her pup’s shenanigans in the clip below. If you’re in need of a good chuckle, this will give you one!

It has been such a fantastic year and as the holiday season is approaching, I want to give you guys some special gifts as a thank you for all your support… before Jett eats them all Take a look at the link in my bio! #12DaysOfShania