By Jennifer Pernicano on December 19, 2017
Advertisement 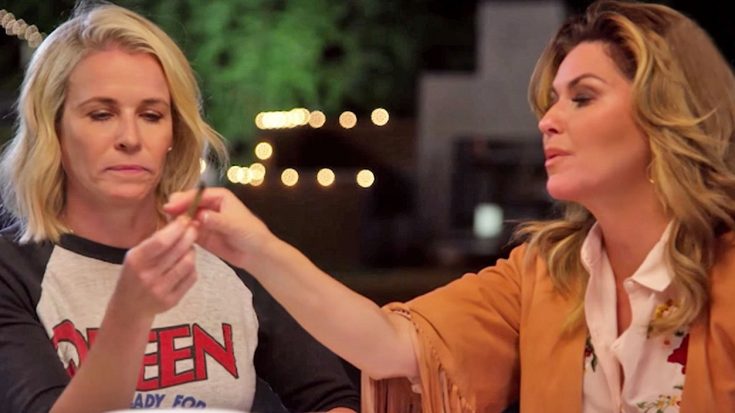 In 2016, comedian Chelsea Handler began a talk show, simply titled Chelsea, on Netflix. It was a three-night-a-week show where she experienced new things and interviewed celebrities that lasted for two seasons.

Chelsea’s format was a little more relaxed than the typical talk show you see on television. She loved to invite her guests to her house for dinner parties. In fact, 12 of the 120 episodes, were dinner parties.

All gathered around the dinner table, one-by-one, the talented guests passed around what appears to be a marijuana cigarette. Everyone but the country singer that is.

The Imagine Dragons lead singer got up to use the restroom and walked into Handler’s glass door, causing everyone to burst into laughter. Once he sat down, Twain asked him,” Dan, what happened to you?!”

As they were all still giggling, Handler held the joint towards the “Still The One” singer, asking her if she wants a turn.

She took the joint from Handler and passed it to Scott, who was seated to her left.

Later on in the dinner party, the country singer opened up on her early years of songwriting, explaining she used to hide her songs because they are “so personal.”

You can watch the hilarious dinner party below.

WARNING: THE VIDEO CONTAINS LANGUAGE SOME MAY FIND OFFENSIVE.