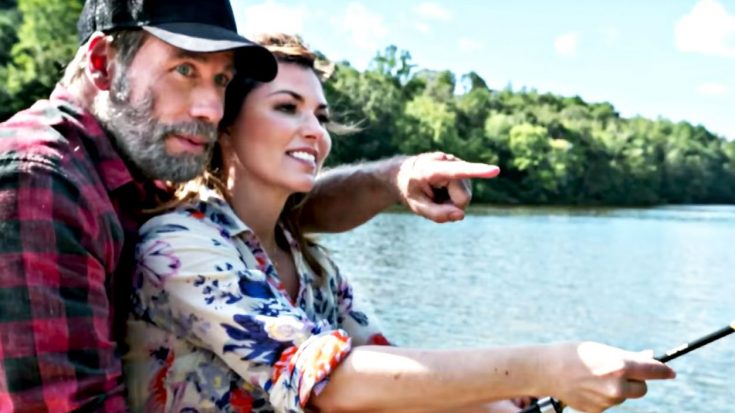 Country music’s highest-selling female artist and this film icon will be locking lips on the silver screen as they portray both sides of a couple whose life is impacted by auto racing.

John Travolta’s new feature film, Trading Paint, features country pop sensation Shania Twain who will be portraying his girlfriend. The movie tells the story of a veteran race driver and his son as they work through balancing their racing careers and personal lives.

Speaking in a series of interviews, both Twain and Travolta have revealed that they will be sharing a good amount of on-screen chemistry in the flick – including, of course, some sweet kisses.

Filmed partly at the Talladega Short Track, Trading Paint focuses not on traditional stock cars like NASCAR’s Cup Series, but instead takes a look into dirt track racing.

Twain recently shared some photos of her and Travolta on set in Alabama for the shoot and together, they held a joint interview with 60 Minutes Australia. The two entertainment icons have been friends for years and it was actually Travolta who convinced Twain to take up a role in his brand new venture.

“It must be hard to kiss one of your mates on screen,” Host Liam Bartlett says to a grinning Travolta and Twain.

“Oh, I think it’ll be very easy!” Travolta said while Twain threw he head back in a fit of laughter.

Watch the full sneak peek from 60 Minutes’ interview below and let us know if you’ll be headed to see Trading Paint in theaters!