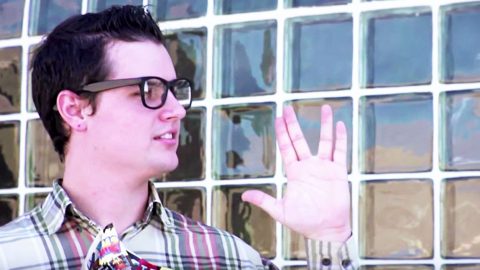 With the help of a downright hilarious music video, one singer gave quite the parody to a country music mega hit that sent viewers in tears of laughter! Getting her big break while making her debut in the country music genre, Taylor Swift rose to imminent success with her plethora of popular songs and anthems! Although making her transition to a more pop-esque vibe, the singer’s country tunes continue to resonate with the young girls and fans that she so boldly spoke to.

However, one musician put his own spin on one of Swift’s biggest hits “You Belong With Me”, taking a comical and scholastic approach to deliver a humorous masterpiece. Revamped with the title “Nerd Like Me”, Mike Rayburn stayed true to the song’s beat while telling the heartbreaking tale of a nerd falling head over converse for the school hottie. As expected, the girl is tied to the star athlete and mega jerk, as our lovable book worm continues to dote on this beauty through song!

In a change of events, the two begin to study together and fall deeply in love, prompting the high school hottie to completely renovate her look and channel her inner nerd! The two enjoy their spectacle-wearing, high sock sporting life together as our favorite nerd takes his victory over the handsome athlete! Who said nice guys finish last?

Of course, this epic video is no shortage of Star Trek references, Nintendo jokes, and flashbacks to the treacherous mathematical theories that many struggled to comprehend. Check out the incredible music video below and tell us what you think!