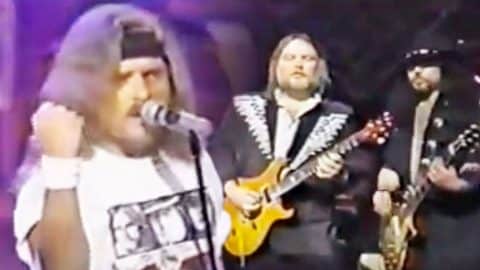 After years away from the studio, Lynyrd Skynyrd made their grand return with a brand new album. It had been over 15 years since their last release, but the band was finally back for good.

In 1991, Skynyrd released the appropriately titled record Lynyrd Skynyrd 1991. The band poured a wealth of energy and time into the album, which featured all-new material.

One of the tracks that Skynyrd crafted for the album was “Keeping the Faith.” Written by Ed King, Gary Rossington, D. Tate, and Johnny Van Zant, the song dives deep into the emotions of a man who has been unlucky in love. It’s a feeling that all of us can connect with, which is why the song is one of 1991’s standout tracks.

Despite all the times he’s been rejected, the narrator expresses that he’s willing to open up to the special lady he describes in the song. He lets her know that he’s putting all of his trust in her, as Johnny sings, “I’m keepin’ my faith. I’m trustin’ in you. So don’t treat me like those other ones do.”

Two years after the album’s release, Skynyrd took the song to the iconic Fox Theatre, a venue that has become synonymous with the band’s name over the years. You can feel the energy rise from the start of the performance, as Ed and Gary begin playing a soft guitar part that gradually grows louder.

The excitement of the performance builds further when drummer Artimus Pyle joins in. Everything explodes once Johnny makes his entrance, growling out the opening lines in his signature style.

The performance only gets more invigorating as it continues, due in large part to Johnny’s raw, but passionate vocal delivery. Harmonizing with him, the Honkettes add extra flair to make the already spectacular performance something from out of this world.

All of Skynyrd’s performances are amazing, but there’s something about this one that places it in a league of its own. Check it out in the video below. You won’t regret it!