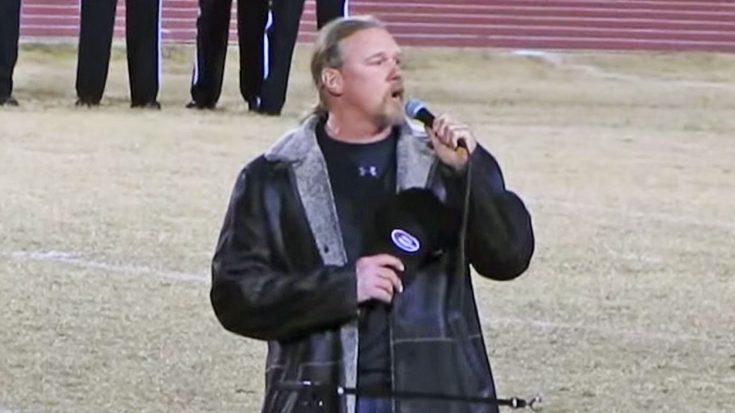 Trace Adkins was spending a lot of time in Eagleville, Tennessee back in 2011, and often found himself at the town’s high school football games. According to one local named Nathan Cron, Adkins attended several of the school’s games, probably because the Eagleville team was having a great season.

By the time the regular football season wrapped up, Eagleville High School was undefeated with a 10-0 record. They got the chance to go to the playoffs, and hosted the second round. After being a dedicated fan all season, Adkins promised to sing the National Anthem at those playoffs, and he stayed true to his promise.

Cron uploaded a video of Adkins’ performance, writing that it was an honor to have “a big name coming to my little home town.” Adkins may have performed in front of a smaller audience than he’s used to, but the stands were still packed with enthusiastic fans.

We’ve heard Adkins sing the National Anthem many times before, and while he always does a great job, there was something special about this performance. Go ahead and see for yourself in the clip below.

With football season well underway, we’re sure that plenty of country-loving football fans have been jamming out to Adkins’ latest single, “Lit.” It’s the perfect song to get you pumped up for a big event, between its electrifying lyrics and boot-stompin’ beat.

So what are you waiting for? Check out the lyric video for “Lit” below, and then download the song on iTunes so you can blast it at your next tailgate party!