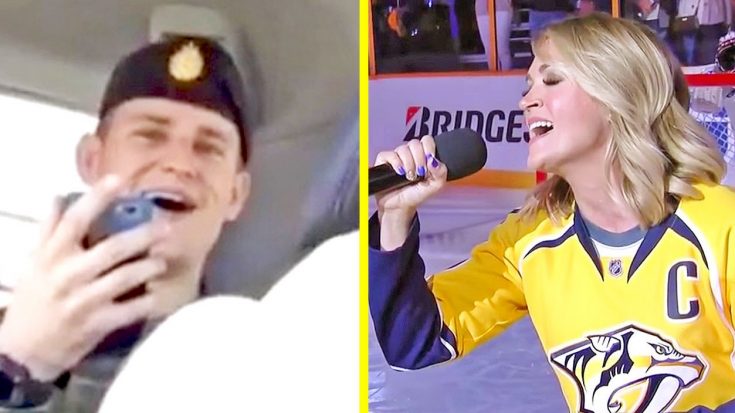 Those in attendance at the Nashville Predators’ hockey match on April 17 were in for a real treat. Everyone had managed to keep it a secret that Carrie Underwood would be performing the National Anthem prior to the match that night.

Underwood’s husband, Predators captain and center Mike Fisher, said he had to keep the whole thing under wraps.”I didn’t tell too many people no,” Fisher said in an interview with WKRN.

After making her surprise appearance, Underwood managed to blow everyone away with her performance of the National Anthem. She also left a lasting impression on a group of soldiers, who filmed their reaction to her performance.

Jordan Pennell and his buddies are actually in the Canadian Armed Forces, but they still have an appreciation for a good performance when they hear it. Since Fisher is from Canada, it’s likely that Underwood’s National Anthem performance quickly made the rounds there as well.

The friends were riding in the car when they decided to listen to Underwood’s performance. In a priceless moment, Pennell and his buddies let out a loud howl of delight when they heard Underwood hit a high note.

“When a couple [of] Canadian Soldiers get goosebumps from #carrieunderwood ‘s national anthem performance at the other nights #nashvillepredators game!” Pennell wrote in the caption to the video.

We’d say they enjoyed her performance, wouldn’t you? Pennell and his friends weren’t the only ones who were mesmerized by Underwood’s performance of the National Anthem. As of press time, the video of her performance has over 500,000 views.

You can scroll down below to relive Underwood’s soaring performance of the National Anthem. Was your reaction similar to Pennell’s and his friends’ when you heard it for the first time? We don’t blame you if so!