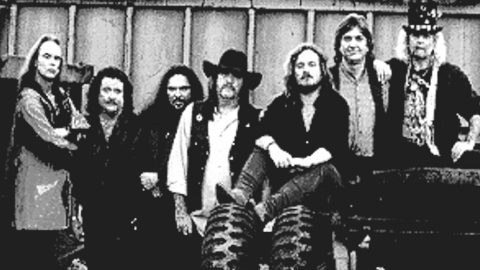 One thing that has always made Lynyrd Skynyrd stand out from other rock groups is their willingness to blend genres. Over the years, the members of Skynyrd have become experts at mixing Southern rock, blues, country, and soul in order to create their own unique sound.

Another thing that makes Skynyrd so remarkable is the fact that the group writes almost all of their songs themselves. But they also have a good ear for outside material that could fit their style. Just listen to some of their cover songs such as “Heartbreak Hotel” or “Call Me the Breeze” and it will be obvious how Skynyrd can make any song their own.

That’s exactly what the group did when it came time to release their 1997 album Twenty. With the exception of one track, all of the material on Twenty was written by members of Skynyrd. The one cover song was titled “None of Us Are Free,” and it’s a real treasure.

Originally a rhythm and blues song, “None of Us Are Free” was written by Barry Mann, Cynthia Weil, and Brenda Russell. Ray Charles was the first artist to record the song, and released it on his 1993 album My World. However, his recording never generated that much attention.

Skynyrd’s version of “None of Us Are Free” ended up being a Southern rock song with the perfect touch of blues. The result was a groovy track that is simply irresistible.

Tune in below to catch the audio recording of Skynyrd’s “None of Us Are Free.” This just serves as further proof of how talented they are!