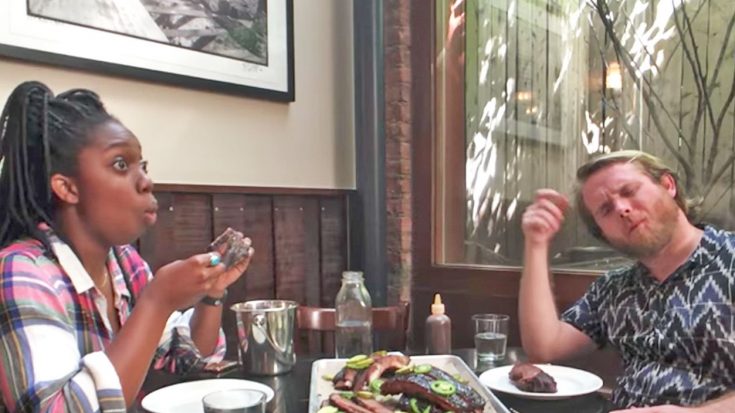 Barbecue in the south is not just food, it’s a way of life. After moving away from their home state of Texas – one of the BBQ capitols of the world – Delisa and Clark never thought they would find a decent restaurant to satisfy their cravings for the southern comfort food.

“I will be honest, I’m a little skeptical,” shares Delisa after Clark revealed he’s compiled a list of the best BBQ spots in the city. “I’m interested to see. Maybe I’ll eat my words, but for right now, I’m gonna eat these ribs and see if New York can put it down.”

The first restaurant up at bat was Fette Sau (German for “fat pig’), the Texans immediately noticing the BBQ joint is set up highly reminiscent to what they had become accustomed to in the Lone Star state. After indulging in a plate full of ribs, beans, pork belly, and Hawaiian rolls, Delisa and Clark decided to give Fette Sau the Texas stamp of approval.

After overly enthusiastically discussing their love of the food, they caught the attention of a Brooklyn-native who offered to drive them to his personal favorite BBQ, Hill Country in Manhattan. The three of them then made the drive across the Brooklyn Bridge to the man’s recommendation, the Texans inevitably deeming the joint “Lone Star approved.”

The third stop on their “Texas journey to finding the best BBQ in New York City” was an upscale BBQ joint called Blue Smoke, the restaurant going on to also win their hearts (in addition to their stomachs).

You can watch the video below.