By Jennifer Pernicano on October 13, 2017
Advertisement 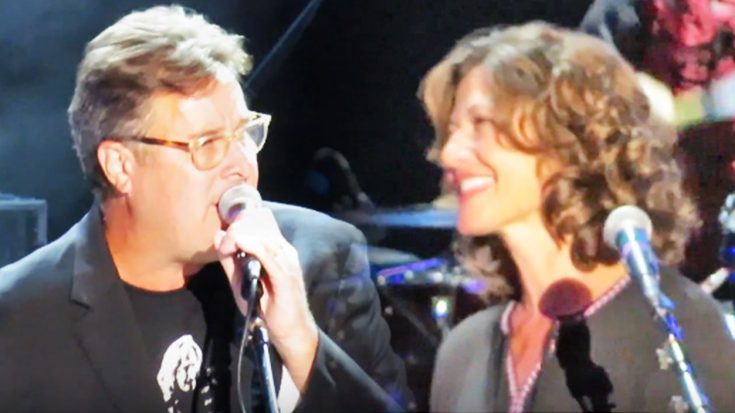 An audience in Englewood, Colorado was treated to the sweet sounds of a Vince Gill and Amy Grant duet during a Colorado Music Hall of Fame event in August 2017.

Together, they performed the iconic Dan Fogelberg song “Longer,” which was originally released on his 1979 album Phoenix, as well as his 1982 greatest hits album. It became his highest charting single of his career, hitting No. 1 on Billboard‘s Adult Contemporary chart and No. 2 on the Hot 100 chart.

Gill and Grant were at the event singing this particular song, to debut their duet which will be included on A Tribute to Dan Fogelberg, a collection also featuring Garth Brooks, Train, Zac Brown, the Eagles, and Donna Summer. The tribute album, which was produced by Fogelberg’s widow Jean, will be available on November 17.

The romantic song compares different events with the singer’s emotional connection to the one he or she loves.

They take turns singing the romantic lyrics to each other, gazing into one another’s eyes every few phrases. Just the way they look at each other throughout the performance, you can clearly tell just how in love they are.

Watch their sweet performance below, and to hear the recording click here.