Steve Harvey Has Hysterical Conversation With The World’s Cutest Cowboy 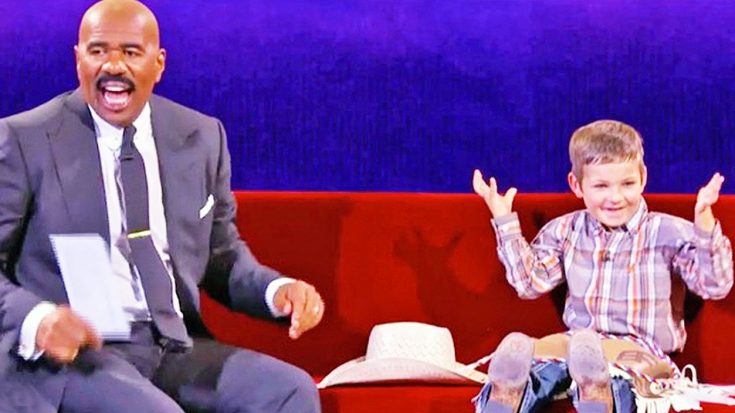 Steve Harvey may have found the most adorable cowboy on Earth!

When he’s not busy hosting Family Feud, Steve serves as the host of a different television program that is equally hilarious, if not more so. Called Little Big Shots, the show is all about showcasing the incredible and unusual talents of children from all over the country.

Steve talks to each child before they go up on the stage to show off their talent. These interviews are usually quite comical, since kids have the tendency to say the silliest things sometimes. Steve makes the exchanges all the more hysterical, and his reactions are priceless!

During an interview with ET, Steve revealed that the people that work on the show try to prepare the kids to respond to his questions in a certain way. But as anyone who has watched the show can tell, the interviews rarely go according to plan.

“I know how to talk to kids, because I’ve had kids in my life for 33 years,” Steve said. “I don’t pay any attention to the cue cards…I keep trying to tell them you can’t prep an eight-year-old.”

Not even Steve was prepared for what would unfold when he met a young country boy named Blayze. While filming an episode of Little Big Shots, Steve had one funny conversation with the boy.

It turns out that Blayze is the world’s most devoted cowboy. So devoted in fact, that he can hardly ever be seen without his cowboy gear on! To prove it, Steve showed the audience a photo of Blayze at the beach, still wearing his cowboy hat and boots.

Steve got a kick out the photo, “You was killin’ ’em Blayze!” he said.

But the next photo that appeared on the screen prompted an even more hilarious exchange between Steve and Blayze. The photo showed Blayze riding his trusty horse, Tank. When Steve asked Blayze how he managed to save up his own money for Tank, Blayze’s response was something he never saw coming.

“I raked up a lot of horse poop,” Blayze said with a big grin.

That little comment got a big laugh out of the audience. We think it’s safe to say that Blayze was a big hit!

You’re also sure to fall in love with this little cowboy once you watch his silly antics in the clip below. It will give you a reason to smile today!