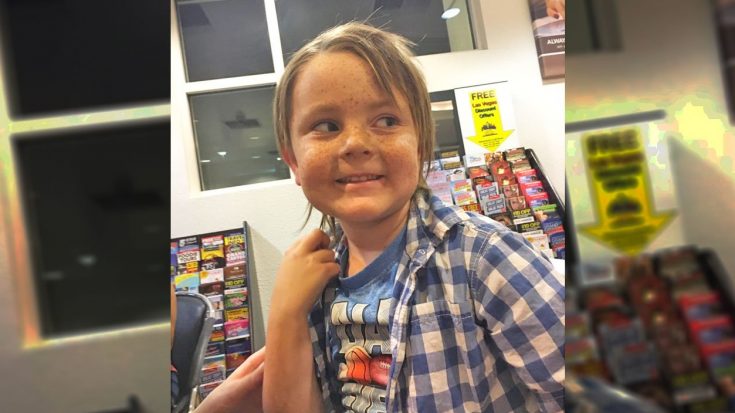 It’s hard to imagine that there would be positive news to come out of the tragedy in Las Vegas on Sunday, October 1st. 59 people lost their lives, while over 500 more suffered injuries after a gunman opened fire on the Route 91 Harvest Festival while Jason Aldean was performing.

As chaos ensued, a five-year-old boy named Aden Houser was separated from his family members and didn’t know what to do. He was at the festival with his sister, his mother Doris and his aunt. Doris took Aden’s sister to the bathroom and left him under the care of his aunt when the shooting began.

As they were running out of the venue, Aden fell down and somehow was separated from his aunt. Luckily, a concertgoer named Lindsey Rogers saw the young boy standing alone.

“I was nervous to take him because I knew that his mom would be devastated to find that her child was gone, but in the moment we thought that the best decision was to get as many people as safe as possible,” Rogers told ABC. “The shots were so sporadic and it wasn’t stopping so we took a chance.”

Once they were in a safe place, Rogers’ friend took a photo of Aden and put it on social media to try to reach someone who knew Aden’s mom, and it worked.

His name is Aiden and we’re at the Motel 6 on tropicana. If anyone knows anything about his moms location please call!! pic.twitter.com/ZxfjWJGd2d

Rogers and her friends were informed by police officers that the best place to take a missing child is a hospital. While they were in the car, Aden’s grandfather messaged his phone number and said he would pick up Aden at the hospital.

“I’m not even sure how it happened. I just know all of a sudden we had a phone number, and we called it and it was his grandpa,” Rogers’ friend Taylor Sutton said.

The next morning when Aden’s mother was released from the lockdown, she went to her father’s house to pick up her son. The garage door opened and her five-year-old ran into her arms.

“His whole face lit up. I dropped to my knees. I don’t think we’ve ever held each other that hard and that tight. We were one for a minute and he just didn’t want to let go,” she said.

After hours of not knowing if her son was okay, this mother was able to reunite with him, and it’s all thanks to strangers. Watch the clip below to see more about Aden’s story.

If you are in the Las Vegas area, Stoney’s Rockin’ Country is putting on a Solidarity Concert on Wednesday, October 4 with all proceeds going towards the Las Vegas Victims’ Fund. You can learn more about Stoney’s Solidarity Concert here.