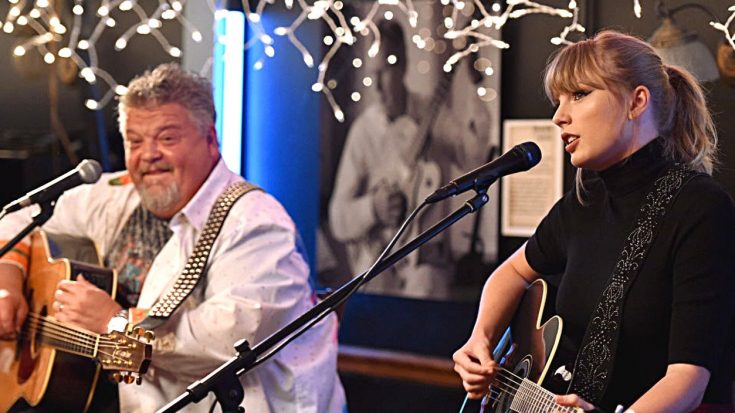 Way back in 2004, a 14-year-old singer caught the attention of Big Machine Label Group’s Scott Borchetta while she was performing at the Bluebird Cafe in Nashville. That artist was Taylor Swift.

Within a year, Swift was signed to Big Machine, and her debut single “Tim McGraw” was released in 2006. After that, Swift experienced immense success in country music before crossing over to pop for her last two albums.

On Saturday (March 31), Swift brought things full-circle when she showed up for an unannounced appearance at the Bluebird Cafe. The headliner was songwriter Craig Wiseman, who was in on the secret that Swift would be performing there.

The Unheard Story Behind “Love Story”

Swift and Wiseman, who have been friends for years, shared some personal stories with the crowd about what it was like working (and partying) together.

Leading in to the introduction of one song, Swift explained that during one writing session, she played a song for Wiseman wondering if he’d help her write it. But he didn’t understand it, so they moved on.

When she left, Swift finished the song herself, and it became one of her biggest hits. “This is the song I almost wrote with Craig Wiseman,” she said. “It’s called ‘Love Story.‘”

In addition to “Love Story,” Swift sang her pop hit “Shake It Off,” as well as another song that brought her back to her country roots. That song was “Better Man,” which was actually recorded by Little Big Town.

Written entirely by Swift, “Better Man” won the CMA Award for Song of the Year and a Grammy Award for Best Country Duo/Group Performance. While Swift has performed it live before, it hasn’t been often. So her Bluebird performance was a true rarity!

You can imagine how thrilled the Bluebird crowd must have been when they heard Swift start singing “Better Man.” But rather than imagine it, how about you witness the performance for yourself? You can do so by checking out the clip below!

After hearing Little Big Town’s recording so many times, it’s quite brilliant to hear “Better Man” from the person who wrote it, isn’t it?