Tearful Reba McEntire Loses It During LeAnn Rimes’ Tribute To Her 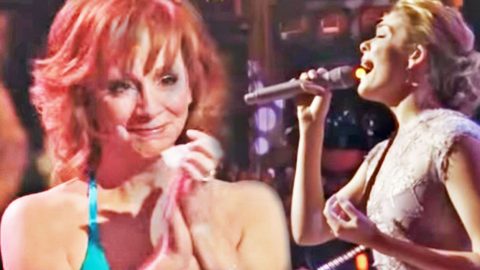 Bringing a country legend to tears isn’t an easy feat, but the instant Reba McEntire heard the heavenly and incredibly emotional performance of one of her biggest hits by a fellow country star, she couldn’t hold the floodgates back.

During a 2006 performance in part of the honorary CMT Giants series, a special night was held to honor country megastar, Reba, and featured a star-studded lineup of performances in tribute to her far-reaching musical legacy.

Her few moments honoring one of the most notable women in country music’s history were so moving, in fact, that Reba herself was left in a puddle of tears. Rimes was blessed with the voice of an angel and nowhere was that more evident than in that very special performance that Reba surely holds close to her heart.

After she had finished belting out this dazzling super-hit and a shockwave of emotion, Rimes rushed to embrace Reba and her family just off the side of the stage.

Watch this truly beautiful and breathtaking performance in the video below.