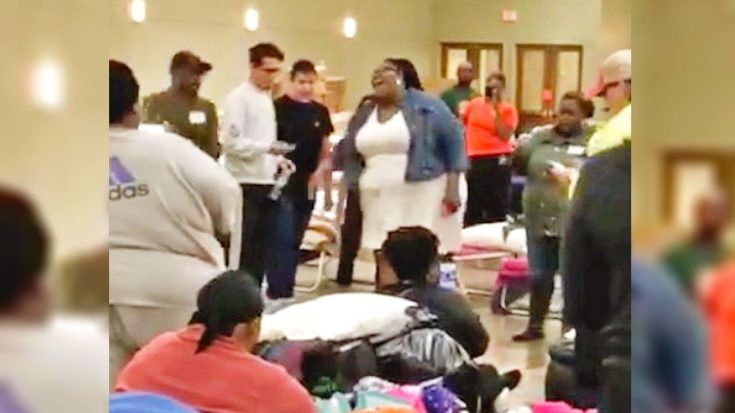 According to a report published by The Weather Channel on Thursday (August 31), 29 people have died as a result of Hurricane Harvey. The storm and its after effects have been wreaking havoc on Southeast Texas since it made landfall on Friday night (August 25).

Countless people have been forced to evacuate their homes and find a safe place to stay. Shelters have opened their doors to those displaced by the storm, providing a temporary home to those in need.

It is at one of those shelters that a bright moment of hope emerged. The moment took place at the Lone Star Expo Center in Conroe, which is currently serving as a shelter.

On Tuesday (August 29), Joni Villemez-Comeaux captured a remarkable moment on camera, as a woman named Victoria White suddenly broke out into song in the middle of the Lone Star Expo Center.

The video shows White surrounded by a small group of people who start singing soft harmonies to a gospel song. White is the one who takes the lead, her powerful voice booming throughout the expanse of the shelter.

In the midst of such a sad time, White was able to bring joy to the shelter’s residents with her jaw-dropping performance. People stopped what they were doing to listen to her sing, and others joined in, clapping and smiling the entire time.

The video of White’s performance went viral, generating over 16 million views since it was posted. In just two days, she has managed to touch millions with her gorgeous voice and her message of hope.

After White’s performance went viral, the folks on Good Morning America knew they had to speak to her. White took part in a video interview with the show’s hosts, and shared how her special performance came to be.

It turns out that White is one of the volunteers working at the shelter at the Lone Star Expo Center. She explained that she felt the push to come to the shelter after her local shelter had met its volunteer capacity.

“We knew we wanted to be boots on the ground and so we had to figure out somewhere that had space for volunteers,” she said. “We found out that the shelter here in Conroe did, and we came to lend our gifts.“

As for her thoughts on her now-viral performance, White says she was simply happy to help bring a bit of hope to everyone staying in the shelter.

“It was great to be able to meet, and interact, and encourage everyone who was present,” she said.

You can watch White’s full interview below. When you’re done, tune in to her viral performance that is continuing to inspire millions.

If you’d like to contribute to the Harvey relief efforts, you can do so by donating to the Salvation Army here.