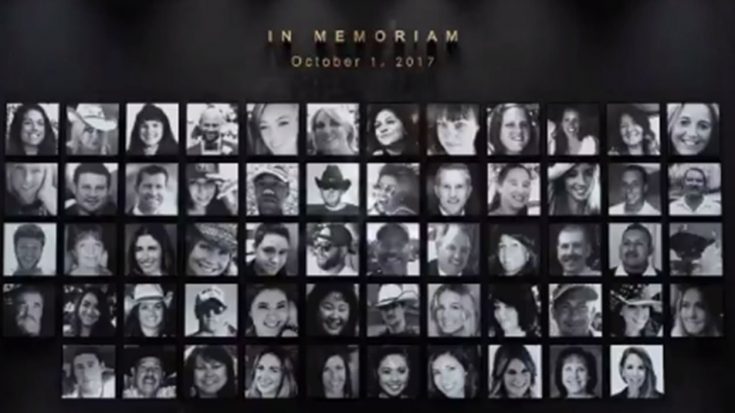 It wasn’t even an option for the 51st Annual CMA Awards to not mention the horrific and tragic mass shooting at the Route 91 Harvest Festival on October 1. Although the show is usually known for its light-heartedness, this event affected many country singers, fans, and the entire country music community.

“It’s very important to use this show as a vehicle to uplift our community and our industry,” co-host Brad Paisley told PEOPLE. “The best thing we can do is acknowledge it, pay our respects, and then perform this music and use this music for what it’s best at, which is unifying and giving us joy and finding the light here.”

During Jason Aldean’s headlining set, a gunman began spraying bullets on the 22,000+ country fans, killing 58 and injuring hundreds more. Acts of bravery surfaced with veterans, off-duty first responders, and even civilians helping strangers with their wounds and rushing them to the hospital, some putting their own lives at risk to help people they had never met before.

The CMA Awards paid homage to the 58 lives lost in the most beautiful way. They kicked off the show dedicating the night to victims, their families, and everyone affected.

We love you and we will never forget you. #CMAAwards pic.twitter.com/Qazzndpou9

Carrie Underwood performed “Softly and Tenderly” as names and photos of the country singers and other country industry members we lost this year displayed on the screen behind her.

She sang the song with lots of power until the names and photos of the 58 people who lost their lives in the Route 91 shooting were put on the screen. As she broke down in tears and was unable to finish the song, the entire Bridgestone Arena was in tears. Watch it below.

Moving tribute from @carrieunderwood and @CountryMusic Association to those lost in Las Vegas on October 1st. Rest in peace…#CMAawards pic.twitter.com/FwhautLfVe