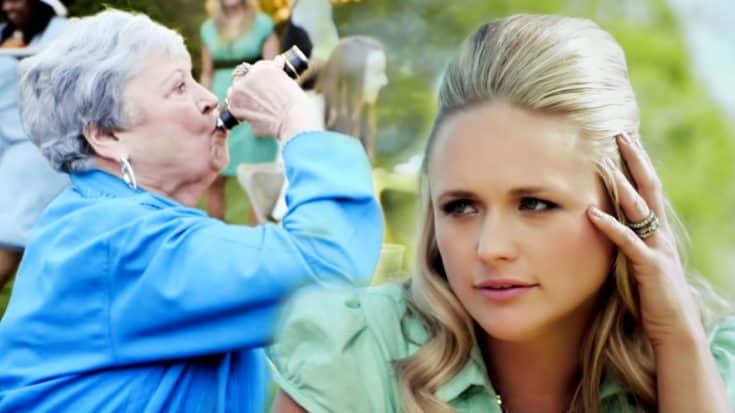 While country queen Miranda Lambert is best known for her work as a solo artist, she is also one-third of the all girl country trio, Pistol Annies. Off the trio’s sophomore album, Annie Up, Lambert and fellow bandmates Ashley Monroe and Angaleena Presley aired all their families’ dirty secrets in the music video for “Hush Hush.”

The girl-powered trio enlisted their actual family members for the sassy music video, Lambert’s grandmother inevitably going on to steal the show when she drank straight out of a flask.

“Yes that is my real grandma drinking out of a flask:)! And the rest of our real crazy families. No acting involved!” wrote Lambert.

http://t.co/bnAflBD8rW yes that is my real grandma drinking out of a flask:)! And the rest of our real crazy families. No acting involved!

The video begins at a traditional southern church service, the preacher inviting the congregation to join him for a Sunday afternoon church picnic. Once all the prim and proper families settle in at the potluck, the ladies of the Pistol Annies began airing all of their families’ dirty laundry.

You can watch the hilarious video for “Hush Hush” below.