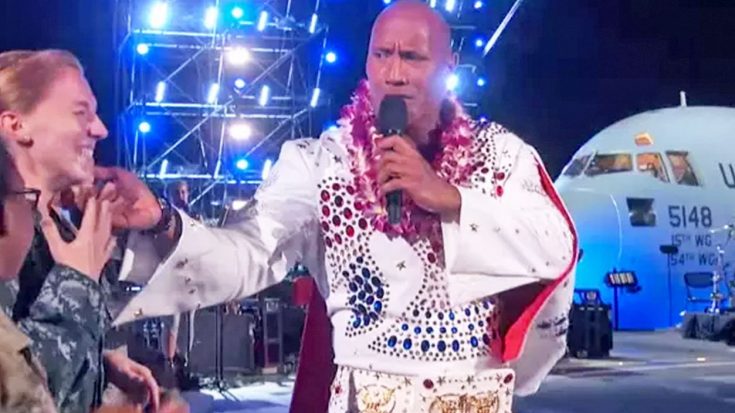 Dwayne “The Rock” Johnson is perhaps one of the most inspiring and capable men in the world, building his fortune and admirable success atop a struggling past and financial hardships. The wrestler turned actor is loved by many for his infectious personality and charitable efforts that positively impact the lives of others.

Although recently wrapping up his involvement with the highly successful Disney release, Moana, Johnson constructed and successfully put on a concert-esque event that he fittingly called Rock the Troops. The special is set to air on Spike TV on December 13th, filled with electrifying performances from artists such as Aaron Lewis, Flo Rida, and Nick Jonas, with celebrity appearances from various artists, including Terry Crews and George Clooney.

However, no event can be complete without the dapper man himself partaking in a riveting performance of Elvis Presley‘s rebellious hit “Jailhouse Rock”! Johnson took to the stage in an Elvis inspired jumpsuit complete with an array of gems and gold trimming fit for a king! The crowd went absolutely wild as the wrestler pranced across the stage, energetically dancing with a handful of military women in uniform! ﻿Of course, his performance wasn’t complete without an explosion of fireworks and an entourage of dancers! Go big or go home, right?

Be sure to check out the clip and tune in to the military special!