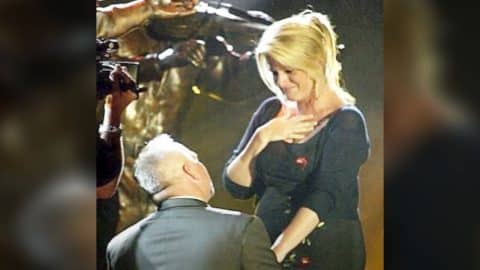 May 25, 2005, is the day Garth Brooks once called “one of the greatest days of my life.” That’s because on that day, Brooks proposed to his girlfriend and fellow country star Trisha Yearwood, and she said yes.

After 11 years of marriage, Brooks and Yearwood are one of the most powerful couples in country music. They support one another in all of their ventures, with Brooks making appearances on Yearwood’s popular cooking show and Yearwood joining him on his monumental World Tour.

Although Brooks and Yearwood dated for a while prior to their engagement, the day of their proposal is when their love story truly began. Brooks pulled out all the stops to make sure the moment was one Yearwood would never forget.

Brooks hinted toward a “big event” coming during a press conference at the ACM Awards a week earlier, but he managed to keep his plans a surprise. On May 25, 2005, Brooks and Yearwood were on hand for the unveiling of ten bronze statues of country music artists at Buck Owens‘ Crystal Palace in Bakersfield, California.

One of the artists who had a statue designed in his likeness was Brooks. As part of his proposal plan, he made a special request to sculptor Bill Rains to include a wedding ring on the statue’s left hand.

In front of 7,000 people, Brooks led Yearwood over to the statue and pointed out the wedding ring. Once she realized what was going on, Brooks whipped off his hat and got down on one knee before he asked her the big question.

Of course Yearwood said yes, and the moment was an emotional one for both her and Brooks. Jerry Hufford, the talent coordinator for the Palace, told People after the proposal, “[Trisha’s] knees were like Jell-O. She was totally stunned.”

Over the years, Brooks and Yearwood’s affection for one another has continued to grow. Both of them often talk about their relationship, with Brooks telling Ellen DeGeneres during an appearance on her show he’s happier than he ever imagined.

“I’ve got to tell you, I never knew it could be like this,” he said. “I never knew that every day you could wake up and feel like this.”

You can listen to Brooks talk more about his life with Yearwood in the video below.

Wishing these two lovebirds many more years of happiness together!