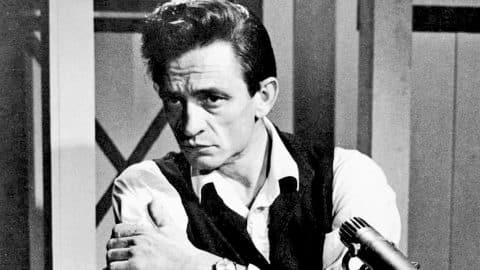 One of the biggest moments in any country artist’s career is when they get the chance to perform at the Grand Ole Opry for the first time. Ask any one of today’s country stars, and we’re sure they’d name their Opry debut as one of the most memorable moments of their life so far.

Such was no different on July 7, 1956, when a rising star in the country community by the name of Johnny Cash made his first appearance on the famous Opry stage. The night was monumental for more than one reason…it was also the first time Cash met his future wife, June Carter.

While on tour with Elvis Presley, Carter had become a big fan of Cash and his music. Cash’s feelings toward Carter were mutual, since he had grown up hearing her sing in her family group, The Carter Family.

After running into one another backstage, Cash and Carter felt like they had known one another forever. “I’ve always wanted to meet you,” Cash reportedly said to Carter, to which, she responded with, “I feel like I know you already.” 12 years after their first meeting, Cash and Carter were married, and remained together until Carter’s death on May 15, 2003.

Despite being active as an artist for only two years at the time of his Opry debut, Cash already had a handful of hits under his belt, and his single, “I Walk the Line,” was climbing up the charts. Two weeks later, the song snagged the top spot on the charts, and went on to become one of Cash’s signature tunes.

Still, the Opry had its doubts about “The Man in Black.” Speaking to author Robert K. Oermann for the book called Behind the Grand Ole Opry: Tales of Romance and Tragedy, Cash said the Opry manager at the time, Jim Denny, questioned why Cash thought he belonged there:

“He looked at my black clothes and long hair and sideburns and said, ‘What makes you think you belong on the Grand Ole Opry?’ So I said, ‘Well, I’ve got a record in the Top 10’ … I said, ‘I think they’d like to hear me.'”

Of course, Cash was right, and it’s likely his Opry appearance had something to do with “I Walk the Line” reaching the top spot on the chart just two weeks later. Besides “I Walk the Line,” Cash also performed his hits “Get Rhythm” and “So Doggone Lonesome.”

Although there isn’t any footage from Cash’s Opry debut, we hope you’ll enjoy the clip below of one of his earliest Opry performances of “So Doggone Lonesome.” Cash was destined to be a star from the start!